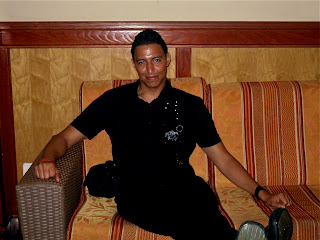 Hi Richard! Welcome to Zigzag Timeline. How did you get into writing?
I've been into writing for as long as I can remember - writing book reports for school and making up stories for my comic books that I used to make at home. But, it didn't come to me as a passion until about seven years ago when my best friend, Dennis, died in a tragic fire. He used to tell me how he wanted to be a horror novelist, like Stephen King, and we would to trade ideas everyday and the stories we would come up with were, to me, movie worthy! It was still just for fun for me, but shortly after the funeral I just had this urge to suddenly write full length stories I pictured perfectly on bookshelves, from characters right down to the cover of the book. Somehow, I think his passion became mine. I knew I could always do it, but now I know this form of art suited me the best.


What kind of books do you write? Do you consider yourself as being part of a particular genre?

I can write about anything that comes to mind. Then again, I like so many things that my imagination is constantly pumping out ideas. For now, starting out, I like to write paranormal and action & suspense books. I can be categorized in that genre for now, but I do plan to take a crack in writing a horror story and dip into the world of the YA's. I just have so many ideas that I don't know where to begin.
Can you tell us a bit about your book? 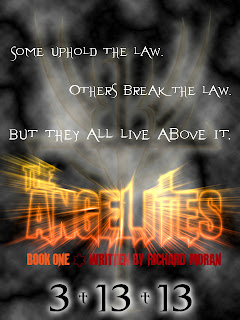 My first book is titled, The Angelites - Book One. Before I knew about Self Publishing, this book was about the size of the book, Dracula - about 700+ pages! No editor in the country would touch it, saying it was too long. So, I cut the book in half and finally got a freelance editor to read it over for me. This book is a paranormal-fantasy, with a little touch of horror. Its about a former NYPD Detective, Gina Vasquez, whose has been chosen by heaven-sent warrior angels to lead a group of chosen heroes, known as The Angelites, to save the world from being destroyed by Satan's most powerful army - The Clucifix. In it you see the ruff road she had traveled - the great start of her life to its tragic turn because of a near-death situation, to its triumphant comeback by showing a true act of bravery. It's such a thrill-ride that no reader would want to end!


What's your favorite part about writing?
I guess making up the characters because I base them off people I know, mainly personality traits. I love comic books and I love reading the stories of people become heroes. I also love reading about world that may not exist or do exist, but we don't know about. When I write, I realize I have to power to create what I want and I believe I tell what's in my heart, which is why readers I've come across so far can relate to it. Everything I write I can say, one time or another, that I wish it happened to me. Or I can watch a movie that stunk up the theatre and think to myself how it could've been cool. The power to create is a wonderful thing. And that's what I love about writing.
What do you find the most challenging?

After coming up with the beginning and the ending of my stories, filling in the body is the most difficult part, because sometimes I'm not how I'm going to get from A to B without making it too corny or too complicated. Also, I tend to get kind of wordy with my writing, so a short story can turn into a trilogy, not because I have a lot to say, but I say the same thing over and over. So, editing and knowing my limits is something I'm suffering from, but I'm learning to control it.

If I were to walk in on you while you were writing, what would I see?
You would see someone looking up in the sky and spinning in his chair while lining up his thoughts. I can get so many great ideas at once that I can't jumble it in at once. It needs to flow and be orderly so that it makes sense. So, I write a paragraph, then stop. I go into a zone and picture it in my mind and see if I like where its going. If I like it, then I write it down and go on to the next part.

If you could bring any book character to life, who would it be, and what would you do with them?

I would bring all of my characters of The Angelites to life and have them run for president. I guarantee they would bring peace to the world!

What's your opinion on self-publishing versus traditional publishing?

Self-publishing is fantastic! You have complete control of how you want your book to love and sound, like you are actually bringing your vision to life. Its not always about business and money - its about doing what you love to do and have fun doing it. I am so glad I self-published and I would change it for anything. I mean it would be nice to get a huge contract from a book writing company, but I wouldn't be interested unless I had complete creative control.


Do you think e-books will ever replace paper books entirely?
Not entirely, because I believe they'll always be a place in the world for paper books. However, I do think ebooks are going to get more popular and eventually take over the market, mainly for the convenience factor, but not to rule out that most ebooks are cheaper than paper books. I still a paper book guy, but I'm not stupid either. I know technology is in and I always want to stay with the times as I owe that to my readers.


Are there any books or authors who have particularly influenced your writing?
J.K. Rowling has played a part with creating her world of Harry Potter and how each book gets deeper into the whole story, building up to the final battle. I like that a lot! That's how The Angelites is going. When reading it you know the big war is coming soon, but reading the books in between will build the reader up and keep them interested until that last book is released. That is what you call a loyal fan base!
Posted by Mary Fan at 8:00 AM