It's the end of the year, and everyone's making lists — bests, worsts, etc. I couldn't let Zigzag Timeline go into a new year without a list of my own. I've enjoyed all the books I reviewed, and I debated for a long time which ones I should spotlight. This list is completely biased; I just picked my five personal favorites.-->

5. Shadow of the Wraith by Ross Harrison 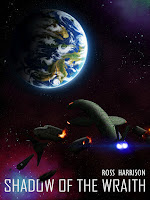 I like spaceships. I like adventure and humor and exotic cultures — Shadow of the Wraith has it all and then some, stories of epic battles and entertaining characters told in Harrison's distinctive, dry voice. Travis Archer, a bounty hunter with a heroic drive and a bit of an attitude, is one of the most memorable characters in sci-fi, up there with Captain Malcolm Reynolds of Firefly and Colonel Jack O'Neill of Stargate SG-1.

4. The Curious Diary of Mr. Jam by Nury Vittachi

What does it take to make Asians laugh? Mr. Jam may have a hard time answering that question before a room full of conservative businessmen, but he seems to know exactly what it takes to make a reader smile. Sarcastic, self-deprecating, curious, and endearing, Mr. Jam's unique brand of comedy comes to life in this semi-true story of a down-on-his-luck Hong Kong humorist.

3. The King of Pain by Seth Kaufman

Poor, poor Rick "the Prick" Salter. He's trapped under his massive entertainment system with nothing to do but read a book about prisons while awaiting rescue. But his pain is our entertainment — his rants, his flashbacks, his musings. And he runs a reality show about torture, knowing how much audiences love to watch others suffer. Kaufman skewers reality television in this clever satire, weaving in allegories about prisons and the idea that we are all trapped. And did I mention it's funny?

2. Thought I Knew You by Kate Moretti

This is one of those books that can easily be summarized in one sentence: a woman's husband goes missing, and she reconnects with her childhood best friend while trying to move on. And yet it was one of the most suspenseful books I read this year. It's also beautifully written and wonderfully poignant.

Hey, look! Spaceships and comedy! The Ultimate Inferior Beings is a witty romp through space, starring a cast of whacky characters who encounter a race of nutty aliens. And it's my favorite book this year because of it's seamless integration of adventure and comedy, its intelligence and hilarity. What's it about? The book trailer says it all:


And because I'm indecisive, here, in no particular order, are a couple of honorable mentions (I wanted to do top 10, but since I only have 31 reviews, that would have been 1/3 of all the books!):