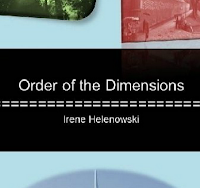 AUTHOR INFO
Irene Helenowski is a statistical analyst living in Chicago. She recently received her doctorate degree in Biostatistics.
Posted by Mary Fan at 9:14 PM 1 comment:

Paul Rasche, author of the "Nazi Occult Space Madness" novel Smudgy in Monsterland, answers questions about his book's background and inspirations. Contact him by email. What was the very first idea you had for Smudgy in Monsterland, and how did the story grow from there?

That's a bit difficult to answer without giving away major plot points, so, SPOILER ALERT: The original idea was “What if someone was attacked by jackals every day of their lives?” The story was then extended in either direction from there—i.e. I had to build the story to explain how that situation came to exist, and then I had to extend the story to explain the ramifications of such a situation.

This is actually my second novel—my first novel, which is untitled and unfinished, was built in a similar way, except the cental idea behind that one is: “What if someone’s cat told them to f**k off?” That central idea also leads to a cavalcade of darkness, insanity, and killings.

My only goal as a writer is to tell an interesting story. I am not interested in drawing parallels to modern society or having a moral. I think that's why Alice In Wonderland is such an influence. I don't want people to learn from the story. The only rule I have for myself when writing is “No research.” Research is for PhDs.

I had the basic idea of this novel in my mind for years and started writing it about five times, but it never took.

That all changed with one drunken conversation with my brother Nicholas Rasche (who is also a writer—google him). I was talking about how my favourite movie genres were Nazi Occult (e.g. Outpost, Hellboy) and Space Madness (e.g. Pandorum, Event Horizon). We speculated about a combination of these two genres. That’s where the idea came from—it’s Nazi Occult Space Madness. The book has all four of these elements.

Before then, the story was set on Earth, in the modern day.

The main character, Odo, is a 12-year-old boy, but this book is decidedly not aimed at children (unless you’re trying to scare them). Why did you choose a child as your protagonist?

Well, it had to be set in an orphanage, so my hand was forced. The main character had to be in an utterly hopeless situation, and things had to keep getting worse for him. He had to be innocent, lost, scared, confused by the world, so that when things start getting supernatural, he just accepts it as another thing he doesn't understand. There was never any “choice” to make Odo a young boy—it just had to be that way.

I feel like the book is aimed at a young adult market. There is a lot of violence and scary things in there, but there's no sex or swearing. I read a lot of Stephen King when I was Odo's age and I turned out juuuuuust fine.

Are there any stories behind the naming of your characters?

I had Lambchop chosen as a name years ago. Some other names are from my real life—Suki is the nickname of my wife's car, Straker is my neighbour's surname. Spider-Legs was the nickname a friend of mine gave to a romantic rival. Other names, like Cruor Muli, as phrases that have just stuck with me over the years.

Other names I had to come up with as I wrote them. A lot of them I got by googling “German first names.” It took a long time to settle on Odo. I also took years before thinking of “Smudgy.” He used to be called Oopsy, Pinky—all sorts of things that never sounded right. When Smudgy popped into my mind, I knew it was perfect.

With the orphans, there's a band I like called “Does It Offend You Yeah.” I heard they got their name by turning on the TV and using the first phrase that came on. I don't know if that's true, but I liked the idea. All of those orphans were just named on the spot, as I wrote. I also had to come up with a lot of place names—they were all just named on the spot as well, except for Runemagick, which is the name of my favourite band (old-school Swedish Death Metal). I listened to them on permanent repeat while I wrote this book (in order to keep the mood right), so I thought they deserved some recognition.

The title of this book refers to a cartoon series that became a cultural phenomenon in the story’s universe, as well as the center of Odo’s world. Why did you choose to feature a cartoon so prominently?

Featuring the cartoon like that was an organic decision. I always prefer stories that are set in one location—in this case that was originally the Monsterland amusement park. So, I had to figure out what Monsterland was and why Odo would want to go there so much. Later on, when I decided to set the book 1000 years in the Nazi future, I had to figure out how to integrate that into the existing “Monsterland” concept. I think it all just came to me as I wrote it. Smudgy had to be central to Odo's mind AND to the outside world at the same time, so making him world-famous was a good way to accomplish that.

Were there any parts of the book you particularly enjoyed writing?

My favourite part of writing this was coming up with the different attractions of Monsterland, like the Fork Fields or the Inky Maze. In terms of actual plot points of the book, my favourite part is when Odo is wielding Pillow, fighting the undead angels on the rooftop of the Haunted Mansion.

Do you have any particular writing habits? Locations you prefer? Snacks that help you keep going?

I wrote this in three main locations: on the couch, in bed, or at work. Once I started, I couldn't stop, I was writing thousands and thousands of words a day. The hardest thing is to get started. I just reminded myself that it didn't have to be the world's greatest novel—I just wanted something that could turn up in a second-hand bookshop for $2.

Of course—a sequel! I have the first part plotted out already. Literally millions of people are killed in the first chapter. A lot of the under-used characters from the first book are featured more prominently—like the Uberhexe, who is only mentioned in passing—people like that.

I love sequels in which the only goal is to outdo the original, and end up being completely nuts in the process. I'm thinking Die Hard 2, Superman 2, Final Destination 2 here. I just want it to be completely nuts.