REVIEW
Well, fuggle me blue! This book was everything it promised to be—and more. I was lucky enough to receive an audiobook version of Streets of Payne, narrated by Joy Nash. The only downside to this is that I have no idea how anything is spelled, so apologies in advance if I get things wrong.

In a future in which law enforcement has been privatized, street-smart Amber Payne is a detective with Securi-Tech, partnered with hacker extraordinaire Kevin Glass. The first thing people notice about her are always her eyes—or rather, the cybernetic implants that replaced her eyes, after she lost hers when street bangers attacked her.

When Amber and Kevin are hired by the powerful Alta Corp to investigate the theft of valuable data, they stumble upon something, much, much bigger than corporate espionage. They find themselves in the crosshairs of a powerful enemy, one who will stop at nothing to end them.

Where to start the gushing? This book has everything a good sci-fi adventure ought to have: intriguing characters, awesome tech, snappy dialogue, thrilling action, and even a touch of philosophy… And the street slang Amber employs is infectious. Brackett really brings his world to life.

The first thing that came to mind when I read (or rather, was listening to) this book was Gibson. And then as the book progressed, I felt shades of Philip K. Dick. Brackett seems like a natural heir to these sci-fi greats. His novel explores the possibilities of cyberspace and artificial intelligence, as well as the possible future of cosmetic surgery. In this world, people can get enhancements of all kinds—muscles, limbs, and more all have artificial counterparts that are more powerful than the real thing.

Pretty much every character in this book counts as a cyborg—part human and part machine. For Amber, it’s her cybernetic eyes. For Kevin, it’s his virtual alter-ego, K2. And then there are the street bangers and mercenaries they run into, who are so jacked up with tech, you start to wonder if they still count as human.

The plot of takes the stories on twists and turns, leading the characters in unexpected directions. I found myself more than once yelling, “What!” The mystery turns out to be far more complex than Amber anticipated, and there were times when I found myself wondering, “What is going on here?!” But the threads all come together in the end, leaving the reader with a satisfying resolution.

As a character, Amber is a familiar figure—the haunted, tough-as-nails detective who will stop at nothing to solve her case. But Brackett also brings her human side to the surface—the compassionate woman who cares about her partner and who isn’t without her faults.

Overall, this book was a very enjoyable read, and I would recommend it to anyone who enjoys a healthy dose of sci-fi. And if you’re too busy to curl up with a book (like I am these days), the audiobook is phenomenal. Joy Nash’s narration really makes the characters and action come alive, giving each person his or her own voice.

What more can I say? If you’re a fan of Gibson, the TV show “Almost Human”, Bladerunner, or anything else by Philip K. Dick, I highly recommend you give this book a try.

ABOUT THE AUTHOR
The storytelling gene was inescapable. A father whose daredevil adventures personified the rebellious preacher's son, a Choctaw mother, and a veritable cast of characters in the family made for lots of "Did you hear about?" stories, as well as the inevitable oral histories.
Influenced by martial arts, trigonometry, Star Wars, and ice cream, Jeff finally decided what he wanted to be when he grew up--which should happen any day now--an author. His long-ignored and oft-lamented Attention Deficit Disorder notwithstanding, you hold in your hands the result of many years of patient writing, re-writing, research, and long hours at the computer.

Jeff's incredibly organized and intelligent wife's influence may be noted in this novel, but she in no way claims responsibility for any of the content, other than to say the story could use some "spice," which is what you would expect from a fan of J.D. Robb.
Jeff and his family live somewhere near Houston, Texas, with two "goggers," three kids, one grandchild, and Dead Tehya, the cat.

Half Past Midnight is his debut novel.

Note from the author: And that, dear reader, is what you get when you allow your wife to write your bio page!

Today, I'm spotlighting Blood and Fire, sequel to Wind and Shadow by Tori Ridgewood (who I interviewed on this blog back in November). 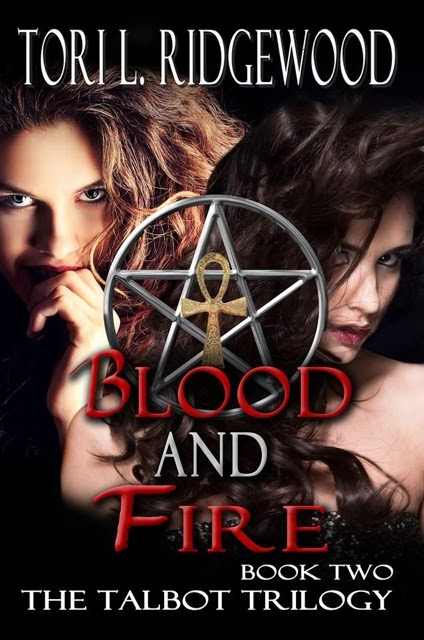 Blood and Fire: Book Two of the Talbot Trilogy is a paranormal romance by Tori L. Ridgewood that was released February 2014.

What chance does one witch have against five vampires? Alone, not much. But Rayvin’s allies are gathering…

The battle between good and evil supernatural forces heats up in the long, cold November nights of the former mining town. But how will Rayvin’s motley crew of spellcasters and shapeshifters cope when they discover the threat they face is even greater than they imagined?

Blood and Fire is available for sale on: 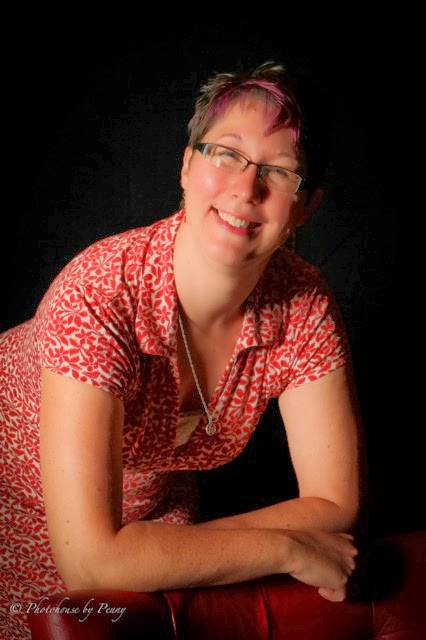 After her first heartbreak, Tori found solace in two things: reading romance novels and listening to an after-dark radio program called Lovers and Other Strangers. Throughout the summer and fall of 1990, the new kid in town found reading fiction and writing her own short stories gave her a much needed creative outlet. Determined to become a published author, Tori amassed stacks of notebooks and boxes of filed-away stories, most only half-finished before another idea would overtake her and demand to be written down. Then, while on parental leave with her second baby, one story formed and refused to be packed away. Between teaching full-time, parenting, and life in general, it would take almost seven years before the first novel in her first trilogy would be completed. In the process, Tori finally found her stride as a writer.

At present, on her off-time, Tori not only enjoys reading, but also listening to an eclectic mix of music as she walks the family dog (Skittles), attempts to turn her thumb green, or makes needlework gifts for her friends and family members. She loves to travel, collect and make miniature furniture, and a good cup of tea during a thunderstorm or a blizzard. Under it all, she is always intrigued by history, the supernatural, vampire and shapeshifter mythology, romance, and other dangers.

Tori is currently working on Crystal and Wand: Book Three of The Talbot Trilogy. She lives in Kirkland Lake, Ontario, Canada with her husband and two children. She is a full-time teacher at a local high school.


Blood and Fire: Book Two of the Talbot Trilogy
By Tori L. Ridgewood