An interview with Vanessa Fogg, author of The Lilies of Dawn.

I was one of those little kids who was always writing. I was always making up stories on paper, stapling together my own little “books.” As a teen I wrote the usual wretched poetry, as well as short stories and sketches. In college I even minored in creative writing.  But my major was biology, and after college I took a long break from fiction writing as I concentrated on building a career in scientific research. I slowly made my way back into fiction after more than a decade away, and in 2013 I finally decided to take it seriously (it helped that I also left scientific research at the same time).

Reading, I guess! I can’t remember a time before I could read, and I think wanting to write my own stories was just a natural response to reading stories.

This story grew from an image: the picture of a girl standing in her boat on a lake of blooming lotus flowers. The girl is staring into the sky, watching as a flock of cranes approaches. She knows that the cranes are intent on eating and destroying her flowers.

Where did this image come from? Two different sparks.  The first one: this travel article about a beautiful lotus flower-covered lake in northeast Thailand (link here: http://www.atlasobscura.com/places/lotus-lake).  The second spark: a crane sanctuary that my family and I stumbled upon while visiting the Wisconsin Dells.  I’d never seen crowned cranes up close before.

The central image came to me, and then I had to work slowly to understand what it meant and to unfold the plot.

Kai, the heroine of this novelette. Kai is a young woman who’s been forced early into responsibilities that she’s not sure she’s ready for.  She’s devoted to her family and her people; she’s good-hearted and duty-bound, but she’s also resentful of her duties. She wishes that she more freedom than she does. And she can handle more than she thinks.

I don’t want to spoil the plot, so I’ll say here that my favorite scene is the one where Kai, as a child, first sees the cranes arriving at the lake of water lilies. That scene was just a lot of fun to write.

Description, I think. That comes easily to me. Plotting is generally much harder.

No particular writing process. I’m terribly undisciplined, and the process also seems to differ for each story? Some stories come to me as images, some as characters, some only as abstract plot ideas. I find I usually have to wait a while for the ideas to develop in my head; I can’t sit and write until I have at least the basics of the plot already worked out in my mind.

The Lilies of Dawn is the longest thing I’ve written (at ~13,000 words), and from the spark of the first image to the first complete draft was about six months. But I wasn’t writing steadily for all those months; I was turning scenes over in my head and also working on another story. It would be hard for me to say how many hours of actual writing (sitting at the computer and typing) went into this book.

I love fantasy for the magic, the flights of fancy, the escape from our humdrum realism. I love the way contemporary fantasy can rework and echo old myths.  I love the way fairy tales can invoke universal themes and feelings.  And I admit that I’m a world-building geek who love world-building for its own sake.

Many, but I’d like to talk here about Sofia Samatar. Samatar’s first novel, A Strange in Olondria, was a revelation for me.  The book creates a secondary fantasy world that is NOT drawn from medieval European culture, and it depicts that world with a level of depth and detail that I’d never before seen. The countries in her book—the empire of Olondria and the narrator’s home in the Tea Islands—are not thinly disguised real-world analogues; they are clearly imaginary. Yet they’re imagined with such depth and texture that one could easily believe that they actually existed in a historical past.  I could close her book and almost believe that Olondria and the Tea Islands really did exist somewhere across the sea, alongside all the other real-life countries I’ve yet to see.

Samatar has become my role model for secondary world fantasy.  I closed her novel and thought, I want to do this, too. I also want to create a fantasy world that draws from non-Western sources. The Lilies of Dawn is one of my attempts at doing so.

Readers will recognize, I think, that my story draws upon the geography of Southeast Asia, as well as some aspects of culture. My parents are from Thailand (although I was born and raised in the United States), and I visited Thailand a fair number of times as a child. And this story was sparked by a picture of a lotus-covered lake in Thailand, after all.  So I have indeed drawn on some aspects of Thai geography and setting for this story. But I want to emphasize that this world is not an analogue for any specific real-world country or culture. The language and mythology of the story are completely made-up. I wanted Kai’s world to be its own, just as the imaginary worlds depicted in Samatar’s novels are their own worlds.

Aren’t surprises the best part about writing? During the writing of this story, I boxed myself into plot corners twice. But luckily, I also found my way out during the writing, hitting upon the solutions at the same time that Kai did.

Thank you so much for giving me the opportunity to come here and talk about my book! 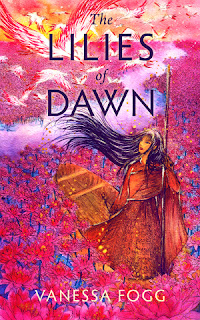 ABOUT THE BOOK
There is a lake of marvels. A lake of water lilies that glow with the color of dawn. For generations Kai’s people have harvested these lilies, dependent upon them for the precious medicines they provide.

But now a flock of enchanted cranes has come to steal and poison the harvest. The lilies are dying. Kai’s people are in peril. A mysterious young man from the city thinks he might have a solution. Kai must work with him to solve the mystery of the cranes, and it will take all her courage, love, strength, and wisdom to do what she must to save both the lilies and her people.

This is a lushly written, lyrical fairy tale of love, duty, family, and one young woman’s coming of age that reminds us sometimes our most important qualities are not the ones we recognize in ourselves.


Newsletter (I give a free ebook to one subscriber every month): http://annorlundaenterprises.com/mailing-list/

ABOUT THE AUTHOR
Vanessa Fogg dreams of dragons, selkies, and other oddities from her home in western Michigan. Her short stories have appeared in number of science fiction and fantasy magazines, as well as in a few non-genre venues.


Twitter: @FoggWriter
GoodReads: https://www.goodreads.com/author/show/8434352.Vanessa_Fogg
Posted by Mary Fan at 9:00 AM