An interview with John Ukah, author of Murder At Midnight. 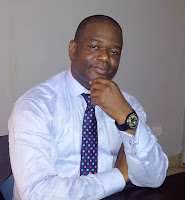 Hi! Welcome to Zigzag Timeline. Can you tell us about your background as an author?
I am delighted to be here. My name is John Ukah. I have just published my first book ‘Murder at Midnight”. I have several other unpublished stories. I also write on topical issues in Nigerian newspapers and on social media.

What got you into writing?
I have always kept a personal journal. Writing is therapeutic. The books I have read also influenced my writing.

The story took shape after I was awakened at night by unusual footsteps outside my door. My imagination took flight. The story is about a young lady who discovered a dark secret and was murdered in a guesthouse at midnight.

Mrs. Marshall is my favourite character. She’s tall with striking facial features. She has engaging round eyes which remind one of an owl. Her protruding ears hear far more than others around her. She is observant and her caustic remarks create tension and ill-feelings.

It is the crux of the story. The scene where a young lady is found brutally murdered in her bedroom.

Excerpt from Murder at Midnight:

I looked at Ayuba, who shrugged his shoulders. So, I put my shoulder to the door. The door was quite good, but my shoulder was better. The door flew off the hinges, when I smashed into it. We rushed in and met a gory sight. Maria was lying face up on her bed; her eyes were open and staring in what seemed to be surprise, at the ceiling. Hear mouth hung slightly open. A butcher knife was buried deep in her chest and the bedsheets were caked with dried blood. I did not need a doctor to tell me that she was dead. Ayuba gasped in shock and Mrs. Marshall screamed and fell forward. I caught hold of her, just in time to avoid a nasty fall.
“She is dead!” said Ayuba, in a strangled voice. Shock and dismay were boldly written on his face. It dawned on me that this was the same room in which a young lady had hung herself earlier in the year. Was it a room of death?

Every book is an adventure of its own. It can take anywhere from a couple of months to several years. My writing is inspired by conversations with others and personal experiences. A fertile imagination gives wings to such experiences or conversations. I do some research. Make a lot of notes. I prepare broad outlines and chapter plans. I write a few chapters at a time and not necessarily in a sequential order. I edit them over and over again. It is useful to get feedback from a reader.

Detective thrillers and horror novels are my favourite genres. My love for writers like Stephen King, Patricia Cornwell, James Patterson, Agatha Christie and Dean Koontz pulls me to these genres.

A number of authors have influenced or inspired me. Especially detective crime novels by Agatha Christie and Stephen King’s books. I am inspired by talented writers who are masters of the craft of storytelling. Superb writers who create vivid and unforgettable characters

Did you ever surprise yourself when you were writing your book? Characters who took on lives of their own? Plot elements that took unexpected turns?
This was what happened when writing my book. The characters took on lives of their own and the plot took a different direction. The story turned out differently from what I planned from the beginning. I had to stay true to the characters I had created. 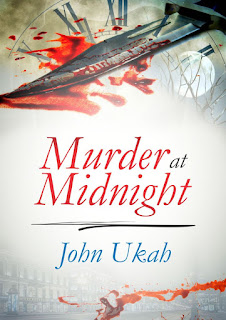 Murder At Midnight tells the story of an ex-police officer, Alex Simpson who happens to be at the Kinging Guest Lodge, each time a guest dies. The fact that on this occasion, there are eight suspects (including himself) who appear to have motives, when a young woman is killed in her bedroom, is something that will appeal to lovers of crime fiction and murder mysteries.

The author, John Ukah is a banker who was educated at the University of Benin in Nigeria. This is his first book.

Murder At Midnight is available on Amazon, Smashwords, Kobo, Apple, Barnes & Noble (Nook),and Okadabooks. This is the Goodreads page.