From the Diary of a Jaded Juggler

by Pamela Crane
Author of The Admirer’s Secret, A Fatal Affair, and A Secondhand Life

I became a professional juggler almost five years ago to the day. I didn’t practice with oranges or flame-throwers. I bolted out of the gate juggling babies.
No, I’m not into child abuse. I’m metaphorically referring to the juggling act that took over my life since my first daughter was born. Three kids and a pregnancy later, I’m expecting my fourth child in almost as many years, and every morning I wake up wondering how the heck I’m going to finish my next book.

My life isn’t average, you see. I’m a writer, and as fellow writers know, we are anything but normal. Always crafting a story, thinking of ways to market, conjuring characters… We’re an eccentric bunch. But with pregnancy hormones, dirty diapers, meals to prepare, and constant cleaning, writing can easily slip into a past-time that becomes just that—the past.
The Admirer’s Secret, my first romantic suspense book, was started BC—Before Children. So writing it came easily, and since writing it was a form of therapy after enduring a traumatic experience (for the juicy details pick up a copy of the book), the words couldn’t come fast enough and the emotions poured on to the paper.
After that, writing went downhill as baby #2 arrived, then #3 on the heels of that one, and now I’m expecting baby #4. And yes, I’ve finally figured out what causes it and know not to drink the water anymore. On top of the kids, I am a full-time work-at-home editor, so kids + job = no sleep. Ever.
If you’re a stay-at-home parent or career person or both (like me) who writes, the big dilemma becomes how and when to find time to write. You may know exactly what I’m talking about when I say that after a day of plugging my ears to the incessant whining of my four-year-old, and refereeing toddler wars between the other two (and often laughing at their hilarity as my two-year-old and eighteen-month-old squabble in unintelligible arguments over a broken toy), the last thing I feel after putting the kids to bed is motivated or inspired. But if I ever want to quit my other job and pursue my writing passion, the words have to come.
So how do I make them fall into place on paper?
First, you need support. And by support I mean a babysitter or spouse or family member or nanny willing to take the kids off you once in a while so that you can focus.  For me, I can’t craft meaningful prose without quiet alone time. My husband—a Godsend—gives me what we’ve coined “writing retreats.” This involves me getting away for several consecutive days so that I can write. My second book, the novella A Fatal Affair, evolved completely from one such writing retreat.
Another method to avoid madness is giving yourself writing goals. For me I could never pump out 5,000 words in a day, but small goals worked. One chapter. One scene. Even one paragraph. Just something to keep me going each day or each week. Setting goals that you aren’t allowed to break (just because you’re the boss) can help keep your writing mojo going.
Lastly, write something, anything. Some writers blog. Some writers engage in poetry. Some writers dabble with words. Even if it’s not your story, at least commit to writing regularly. As I was working on my third book, A Secondhand Life, much of the story came together from little notes I’d write in the middle of the night, or a dream I jotted down. It’s sometimes during those insane moments of chasing a diaper-less one-year-old as she’s peeing all over the floor, or prying chewed-up crayon pieces out of your toddler’s mouth, when a thought will hit you. That’s when you hit the pause button to grasp whatever that thought is and toss it in your notebook.
It’s not easy being a parent, especially when you’re a juggler with work deadlines and a house to keep “clean”—term used loosely. But when you’re an aspiring writer on top of that, don’t let your aspirations die simply for a lack of time and energy. Find a way to make it happen. It’s not easy, and it’s not going to produce your best prose at first, but the more you put your heart into it and find slivers of time here and there, the more you’ll come out with something powerful and provocative and engaging.
Consider it therapy. Lord knows how much we jugglers need it. 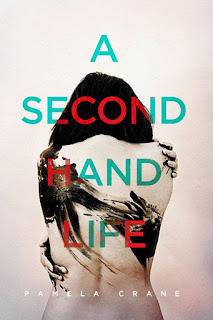 In a freak collision when she was twelve, Mia Germaine faced death and the loss of her father. A heart transplant from a young murder victim saved her life, but not without a price. Twenty years later, chilling nightmares about an unresolved homicide begin to plague Mia. Compelled by these lost memories, she forms a complicated connection to the victim—the girl killed the night of Mia’s accident—due to a scientific phenomenon called “organ memory.”

Now suffocating beneath the weight of avenging a dead girl and catching a serial killer on the loose dubbed the “Triangle Terror,” Mia must dodge her own demons while unimaginable truths torment her—along with a killer set on making her his next victim.

As Mia tries to determine if her dreams are clues or disturbing phantasms, uninvited specters lead her further into danger’s path, costing her the one person who can save her from herself. More than a page-turning thriller, A Secondhand Life weaves a tale of second chances and reclaimed dreams as this taut, refreshing story ensnares and penetrates you.

Pamela Crane is a North Carolinian writer of the best-selling suspense novel The Admirer’s Secret, A Fatal Affair, and A Secondhand Life. Along with being a wife and mom of three rug rats with another on the way, she is a wannabe psychologist, though most people just think she needs to see one.

She’s a member of the ITW, ACFW, and EFA, and has been involved in the ECPA, Christy Awards, and Romance Writers of America. Along with delving into people’s minds—or being the subject of their research—she enjoys being a literary reviewer and riding her proud Arabian horse, when he lets her. She has a passion for adventure, and her hopes are to keep earning enough from her writing to travel the world in search of more good story material. Grab a FREE BOOK on her website at www.pamelacrane.com.