BNG Friday: From idea to publication

I can't believe it! The Brave New Girls release is only three days away! It's been an exciting journey for sure. And to think, this all started with Paige and I drinking beer and chatting on Facebook. We were lamenting the fact that the only brainy girls that seemed to show up in sci-fi were relegated to quirky sidekick or bombshell romantic interest roles. And since Paige works with getting girls interested in STEM careers, we soon started grumbling about how a major reason there's such a gender imbalance in tech-centric fields is because girls don't see themselves becoming scientists, programmers, etc. They're plenty interested in the fields as children (66% of fourth grade girls said they liked math and science), but somewhere around their tween and teen years, the interest falls away (only 18% of engineering majors are female). A large part of that has to do with society's expectations, and the sad fact is, our pop culture as it stands rarely makes the brainy girl the main character. 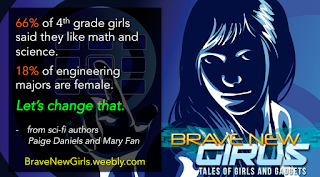 So, in our bubbly, beer-excited states, we decided to do something about it. A little more than a year ago, we said to ourselves, "Let's make an anthology full of stories about brainy girls in sci-fi!" And we did. Skipped over the "should we" and "could we" and "how would we" part, straight to "all right, let's get 'er done." This is what happens when two authors with day jobs as project managers have a vision.

We mapped out a plan, and we followed it. In fact, I'm surprised by just how precisely we were able to follow it. Usually, even when you have a plan, stuff goes wrong, and you end up scrambling, panicking, and pushing things back. But knowing this, we built in screw-up time when we mapped out our timeline. Which meant we allowed extra, extra time for things like editing and getting illustrations.

Of course, we couldn't have anticipated a miscommunication that set editing back a few weeks or an artist's tablet crashing and taking an illustration with it. And I've been burned by launch dates too many times in the day job to believe we could set one and have it happen. We were working toward June 15, 2015, but I kept refusing to announce it officially because I was certain that even more SNAFUs would force us to push it back.

I've never been so glad to be wrong in my life. All things considered, the Brave New Girls project went... crazy smooth. None of the things that could have really hurt us - not making our fundraising goal to pay for all this, not getting enough good story submissions to fill an anthology, not getting enough artists on board, having parties flake out... I had a whole panic spiral of things that could make this project go ka-boom in our faces, and thank GOODNESS none of them happened. 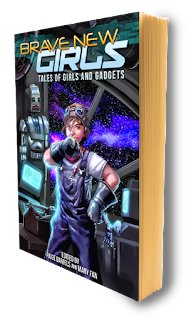 There were also a lot of little bits that I didn't realize had to get done until we were in the thick of it. Little things like... What the dickens goes on the copyright page? What are we putting on the back cover? Did we spell the donors' names right in the acknowledgements? What are the descriptions of the stories we're putting on the website? Can we preorder our own copies before the release date if we're doing Print-on-Demand? GAH!

But we figured it all out, and this anthology is HAPPENING! Monday, it goes out into the world, and I hope it will help show girls that yes, you can indulge your nerdy interests and be the hero! And of course, all the money we make from sales is going straight to tech-happy young ladies through a Society of Women Engineers scholarship fund.

Come Monday, be on the lookout for Brave New Girls on Amazon, Barnes & Noble, and more!

BRAVE NEW GIRLS will be released on Monday, June 15!
Posted by Mary Fan at 9:00 AM