by Michael Meyerhofer
Author of The Dragonkin Trilogy

A while back, author Mary Fan introduced me to one of the best possible uses for a writer’s time: speculating on who should play your book characters in a TV or film adaptation. This seems at first like a lighthearted pastime, the creative equivalent of junk food, but for me, it very quickly turned into something else. After all, these are my characters! They’re part of me. They matter. They can’t be played by just anybody, right?
Well, I had a hard time selecting my dream-choices for some of the roles (Rowen Locke, for example) but others came to me almost immediately. I’d absolutely love to see Ron Perlman play Fadarah. And I’d pay a small fortune to see Steve Buscemi play the Nightmare, or Patrick Stewart or Lance Henriksen play El’rash’lin. But literally the first choice that I thought of was Elizabeth Olsen for Silwren.
Silwren is a complex character—quiet, but roiling with inner turmoil—and if you’ve ever seen Martha Marcy May Marlene, you know that Elizabeth Olsen is one of those actresses who can speak volumes just by sitting there. Watching her, one gets the feeling that at any moment, she might burst into tears, laughter, or flames.

And that’s how Silwren is. It’s already well-established from Wytchfire that when Silwren loses her cool, people die. A lot of people. So her existence and sanity, plus the survival of her friends, depends on her maintaining rigid self-control that usually manifests as inaction. Then again, Silwren understands that eventually, that same kind of inaction will prove just as fatal—to her, to everyone.


So, yeah. If anybody has Elizabeth Olsen’s number, let me know.

In a land haunted by the legacy of dead dragons, Rowen Locke has been many things: orphan, gravedigger,
mercenary. All he ever wanted was to become a Knight of Crane and wield a kingsteel sword against the kind of grown horrors his childhood knows all too well. But that dream crumbled—replaced by a new nightmare.

War is overrunning the realms, an unprecedented duel of desire and revenge, steel and sorcery. And for one disgraced man who would be a knight, in a world where no one is blameless, the time has come to decide which side he’s on.

Rowen Locke has achieved his dream of becoming a Knight of the Crane, and he now bears Knightswrath, the midnight duel that teaches Rowen a dangerous lesson and leaves him with a new companion of uncertain loyalties.

legendary sword of Fâyu Jinn. But the land remains torn, and though Rowen suffers doubts, he would see it healed. His knightly order is not what it seems, though, and allies remain thin. When Rowen and his friends seek an alliance with the forest-dwelling Sylvs, a tangle of events results in a

The sadistic Dhargots still threaten the kingdoms, but another menace lurks in the shadows, playing a game none can see. As Rowen struggles to prove his worth—to his allies and to himself—chaos raises its hand to strike. A price must be paid, and not even the wielder of Knightswrath will remain untouched. 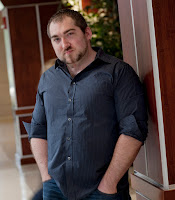 Michael Meyerhofer grew up in Iowa where he learned to cope with the unbridled excitement of the Midwest byStar Trek, weight lifting, and collecting medieval weapons. He is also addicted to caffeine and the History Channel.
reading books and not getting his hopes up. Probably due to his father’s influence, he developed a fondness for

His fourth poetry book, What To Do If You’re Buried Alive, was recently published by Split Lip Press. He also serves as the Poetry Editor of Atticus Review. His poetry and prose have appeared in Asimov’s Science Fiction Magazine, Brevity, Ploughshares, Hayden’s Ferry Review, Rattle, and many other journals. He and his fiancee currently live in Fresno, California, in a little house beside a very large cactus.