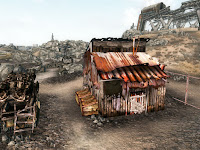 Last but certainly not least, I'm spotlighting "The Last Android" by my co-editor, Paige Daniels! Set in a post-apocalyptic future where technology has virtually faded to myth, it's got that gritty, down-to-earth style that distinguishes Paige's work. Teen scavenger Imogen spends her days collecting scrap for the abusive old woman she lives with, but when she discovers a sentient android -- possibly the last working android in the world -- she fears what will happen to her new mechanical friend... she knows people will just want to take the android apart for parts. So she runs away and sets off in search of a rumored high-tech settlement, where she hopes she and the android will find a new home. Inspired by The Last Unicorn with a heroine that gives me Rey vibes (for those of you who are Star Wars fans, Imogen is kind of like a scrappier, more cynical version of Rey on Jakku), "The Last Android" somehow manages to be an epic journey within the bounds of a short story. It's a fantastic read, y'all, and I'm not just saying that because Paige is my co-editor ;-)

STORY DESCRIPTION
In a bleak future where technology is rare, a young scavenger finds what may be the last mechanical being in the world.

Paige Daniels is the pen name of Tina Closser. By day she works as an Electrical Engineer and Mom mushing her kids from gymnastics and violin practice. After the kids go to bed, she rocks out with her headphones turned to eleven and cranks out books. She is an uber science geek. If she wasn't married to the most terrific guy in the world, she would be a groupie for Adam Baldwin.

THOUGHTS ON BRAVE NEW GIRLS
The true key to innovation in our society is diversity without that you have the same ideas from the same people. We need new people in these STEM fields to spark innovation and creativity.