BNG FRIDAY: How Do You Organize an Anthology?

How do you pick the order of stories in an anthology? It's not something I thought about before embarking on the BRAVE NEW GIRLS journey a few years back, with our first tome: Brave New Girls: Tales of Girls and Gadgets. I always took it for granted that the stories were just... in order.

I suppose it doesn't matter that much, since most people don't read anthologies cover-to-cover in order anyway. They skip around to stories of particular interest to them. Still, for that odd person who does read an anthology the same way they would any other book, we wanted the order to make sense.

For the first anthology, Girls and Gadgets, Paige Daniels and I decided to go for "organized randomness." As in, we wanted the stories to feel like they were in a random order. For example, we wouldn't want our two Mars stories to be next to each other, or for a cluster of virtual reality tales to show up.

For our second, Science and Scheme, we decided to go in the exact opposite direction and organize our stories in sections by subgenre. Just to mix things up.

Looking at the 22 stories we had and knowing we wanted our stories to bookend the collection (last time, Paige's story was first and mine was last; this time, mine opens and hers closes), we settled on four categories: space, earth-based, steampunk, and cyberpunk/robots. Within each section, I found similarities between certain stories and tried to alternate so that, say, our two stories featuring steampunk dragons wouldn't be back-to-back. Below are the results: 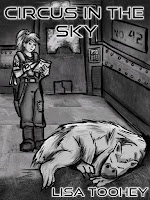 BRAVE NEW GIRLS: STORIES OF GIRLS WHO SCIENCE & SCHEME will be released on August 1, 2017!

Email ThisBlogThis!Share to TwitterShare to FacebookShare to Pinterest
Labels: Articles - On Publishing, Spotlights