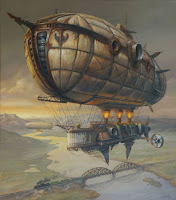 Today, I'm spotlighting one of the stories that will be featured in the anthology: Skyris, a steampunk adventure by A.A. Jankiewicz. Except it's not steampunk in the way you might expect... rather than taking place in an alternate version of Victorian times, it takes place in another world entirely. A vast universe of interconnected planets. Skyris is a princess from an advanced space opera-esque world, but she's visiting the comparably ancient city of Aldamoor... a bustling, steampunk city full of aliens and humans alike. I fell in love with the worldbuilding at once; it reminded me a bit of Disney's criminally underrated Treasure Planet. Skyris is a smart, spunky teen who can't just sit still while visiting a fascinating new place. Eager to see Aldamoor's famed airships, she ventures off alone... and ends up in far more trouble than she could have anticipated. Full of excitement and some of the richest world-building I've read in a long time, "Skyris" was a true delight to read, and I can't wait for the rest of the world to read it too!


STORY DESCRIPTION
In the ancient city of Aldamoor, a princess from another world and an airship pilot go on an adventure. 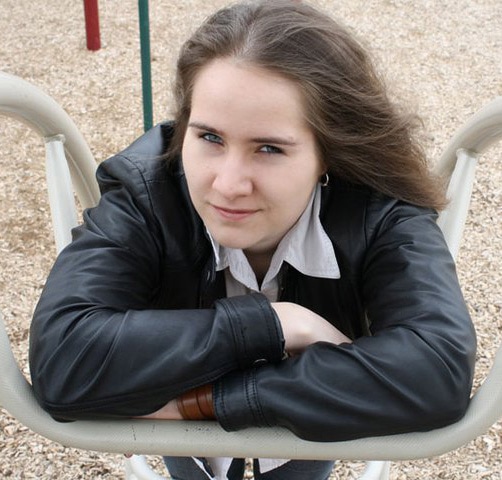 A.A. Jankiewicz (known to most as Agnes) hails from the city of Pickering, Ontario. Her debut novel, Q-16 and the Eye to All Worlds, was published as part of her thesis project at Durham College as part of the Contemporary Media Design Program. Prior to that, she graduated from York University with a BFA in Film Theory, Historiography, and Criticism. When she’s not busy plotting the next great adventure, tinkering in the Adobe Suite programs, or mellowing out with her friends, she enjoys walks with her four-legged companion Meesha. She is currently working on the next installment in the Q-16 series.

THOUGHTS ON BRAVE NEW GIRLS
As a fellow tech girl, I wanted a chance to give back to the extraordinary community I find myself part of. I could think of no better way than through sharing my skill of writing.