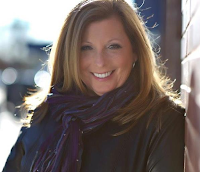 Hi, Alison! Welcome back to Zigzag Timeline, and congrats on the release of your second Lily Lockwood novel, The Silver Cord! When you wrote the first book, did you have a sequel in mind?

Thank you so much for interviewing me again for Zigzag Timeline. When The Lily Lockwood Series Book One: The Seeds of a Daisy was released you were the first to review it and to interview me. It has been very successful so I wanted to keep the tradition alive and have you do the same for Book Two: The Silver Cord.

When I originally began writing The Seeds of a Daisy I had no idea that it would be the first book of a popular series.  After a few months of writing, I knew the ending had to lend itself to segue into book two. The Silver Cord is book two.

How has Lily Lockwood changed from Book 1 to Book 2?

In The Seeds of a Daisy Lily started out being very dependent on the people in her life; her mother, her mother’s close friends, her manager, her boyfriend Jamie Fleming and her assistant. The readers have a front row seat to witness Lily’s growth in the book. By the end of the first book, Lily is a different young woman than she was in the opening chapters.

The Silver Cord takes place two years after The Seeds of a Daisy ended. Lily is a mother of toddler Daisy Rose, her career has taken off, and she is up for a Tony Award for leading role in a Broadway play. Lily appears to be much more self-assured. But looks can be deceiving because, while she has grown since Book One, she is riddled with insecurities and is always second-guessing her decisions and choices.

Even with all the self-doubt buzzing around in her head, when faced with insurmountable obstacles, she faces them head on and Lily grows into a more heroic character.

The Silver Cord has a bit of a thriller element in it through Robbie’s kidnapping during his Doctors Without Borders mission. What was it like writing those scenes?

I thoroughly enjoyed writing those “edge of your seat” thriller element segments of the book as well as the different heart-stopping twists and turns the book takes. I did much research and spoke to many people knowledgeable about Al Qaeda, the C.I.A. and Navy SEALs.

Some of the elements from The Seeds of a Daisy drew from your real world experiences. Is that true for any parts of The Silver Cord?

You’re right, and while there were many facets of The Seeds of a Daisy that were totally inspired by my real life events, for the most part, The Silver Cord was not. Since we all have self-doubt at times, I drew upon my own, put them under a microscope, fed them steroids and voila the readers have a front row seat to Lily’s inner turmoil.

What's your favorite scene from The Silver Cord? Could you please describe it?

Wow, that’s a tough one. While I enjoyed many of the scenes, if I were to describe my favorites, especially the terrorist scenes in Somalia, it would ruin the element of surprise for the reader. I don’t want to spoil that for anyone. I do love the scenes that include characters who readers loved from book one and are back in book two: Auntie D., Fernando, and Tommy. I also introduce three of Lily’s friends, Kristin and Jessica, who she has known since grammar school, and Jodee her costar on Broadway.

After Lily tells the girls that she is contemplating reuniting with Jamie, her ex-boyfriend who had cheated on her in book one. The friends are aghast and, because Lily has spent the last couple of years bashing Jamie, they decide it is their right as the audience to her years of “Jamie Rants”, to hold a “tribunal” to decide whether Lily should get back together with Jamie or not. The tribunal starts off with the four friends drinking wine and eating Chinese food. As the evening progresses, the friends are doing tequila shots and rolling on the floor with laughter. Jamie walks into the room which puts the kabash on the tribunal. The scene is very funny, very Sex in the City.

There is another scene in the book that I love and it is actually a flashback within a flashback, within a flashback. Lily misses Robbie and reminisces about him and a story he shared with her about his grandparents. His grandmother had told Robbie, when he was a young boy, the story of how she and his grandfather, David, had met. His grandmother, Chaya Rachel described their pre-WWII courtship in Poland and how they felt as if they were meant for one another and even felt tied to one another, heart to heart by what David professed was an invisible silver cord.  When the Nazis invaded, they were separated and, unbeknown to each other, both taken to Auschwitz.  During her time in Auschwitz, Chaya Rachel prayed to be reconnected with David and knew their hearts still remained tied to one another. After the war, David found Chaya Rachel and the two were reunited for life.   After remembering that story Lily realizes that she and Robbie are also connected, one heart to the other.

Aside from the writing itself, what’s your favorite part of being an author?

I enjoy interacting with readers and fans of the series on social media and at book signings. I also have spreecast streaming video chats where I can talk with fans from all over the world in real time and answer their questions.

What’s next for Lily Lockwood?

I am currently working on Book Three: The Family Bond. The story revolves around different scenarios that Lily and other characters have involving their family members. There is also an Organized Crime component that includes a relationship Lily unknowingly has with a key member of the largest and most deadly Mafia Family in the tri-state area.

Thanks again for stopping by!

Always a pleasure, let’s do it again after Book Three is released. J

FIND THE SILVER CORD ON AMAZON
Posted by Mary Fan at 9:59 PM