Being a part of a team is something that we all cherish, and have since childhood. There is something about being on a team, any kind of team, that makes you feel special, and at times, less lonely. Typically, a team consists of people with similar interests who share certain goals: Players on an athletic team all enjoy the sport they play, with a goal of winning games. Corporate team members work in the same field and strive for success.

In writing circles, there are many groups, which could easily be considered teams. Team Sci-Fi would consists of writers in that genre with the goal of helping each other succeed. Team Fantasy, Team Horror, and Team Romance would all gather under similar circumstances, sharing ideas and information about a genre that they are familiar with and interested in.

But Team Crazy is a little different, and I am the self- proclaimed queen.

Although my novel, They Call Me Crazy, is about a woman who is a bit nutty, the craziness in the writing is something I think all genres touch on to a certain extent. Everyone tries to have a little fun in their work, whether it is a funny line, an unusual situation, or a quirky character. So "crazy" is present in all writing, not just books and stories in which humor is a major component. 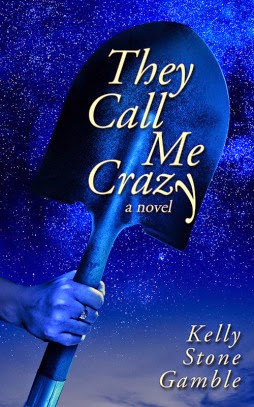 Team Crazy is less about the writing and more about people. At least once in everyone’s life, hopefully more often, they’ve done something they’ve considered crazy, whether it was fearlessly jumping off a ridiculously high bridge (as I did once), dressing as a pickle (as I did once), or getting married to someone you met the night before (as I never did). And while we would like to forget some of these crazy events in our lives, at the time, they seemed like a good idea and we went with it. Doing something funny, unexpected, off the wall, even ridiculous makes us happy. It’s fun. It’s exciting. It’s like adding Tabasco to life’s scrambled eggs to give them a little kick. And it is something that everyone can relate to.

So what makes Team Crazy different than other teams? It’s all inclusive. Writers, readers, doctors, truck drivers, kids, grandmas---everyone is welcome. Because we're all a little crazy.

Cass Adams is crazy, and everyone in Deacon, Kansas, knows it.  But when her good-for-nothing husband, Roland, goes missing, no one suspects that Cass buried him in their unfinished koi pond. Too bad he doesn’t stay there for long. Cass gets arrested on the banks of the Spring River for dumping his corpse after heavy rain partially unearths it.

The police chief wants a quick verdict—he’s running for sheriff and has no time for crazy talk. But like Roland’s corpse, secrets start to surface, and they bring more to light than anybody expected. Everyone in Cass’s life thinks they know her—her psychic grandmother, her promiscuous ex-best friend, her worm-farming brother-in-law, and maybe even her local ghost. But after years of separate silences, no one knows the whole truth. Except Roland. And he’s not talking.

Links where the book is sold:


AUTHOR BIO
Kelly Stone Gamble lives in a hunting lodge in Idabel, Oklahoma, and spends way too much time looking for Bigfoot and the Ivory-Billed Woodpecker, both of which are said to reside in her 1,800 acre backyard. When she isn't writing, trying to keep her dog from befriending a skunk, or shooting various wildlife (camera shooting, that is), she teaches Communications, Humanities and English to students at Southeastern Oklahoma State University.