An interview with Pamela DiFrancesco, author of The Devils That Have Come To Stay. 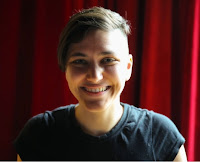 Hi! Welcome to Zigzag Timeline. Can you tell us about your background as an author? As an author, I've been published numerous times in literary magazines. My first book, The Devils That Have Come to Stay , is available on Feb. 1st from Medallion Press.
What got you into writing? I was raised in a household full of readers. My mom took us to the library once a week when I was growing up, and there was a library in an old church in my hometown that was my favorite place in the world. Then, when I was in second grade, my class took a field trip. While we were walking to our destination, my friends and I took turns telling parts of stories. I fell in love with the whole process of creating tension and plot twists and a compelling ending. Shortly thereafter, I started writing stories on my own, and I've never looked back. What was the first idea you had for your book, and how did the story grow from there? I actually wrote the first three pages of the book first, in an undergrad writing class. The challenge of the assignment was to research and write in a specific genre, and I chose Acid Western. Many of the choices I made after that were within the strict parameters of the genre.I put the piece away for years, then when I lost a job that I absolutely hated as a server in a Tex-Mex restaurant, I decided it was time to pick it back up. After re-reading it, I decided that there had to be a journey and some epic battles, and it grew from there. Among your characters, who's your favorite? Could you please describe him/her? Probably my favorite character is a nameless Me-wuk man who is on a moral quest to right the wrongs that the Gold Rush as perpetrated on the people and the land around him. He's short, and has long, tangled black hair, and he wears the traditional garb of Me-wuk men--a buckskin loincloth. There's a bit of magical realism that follows him, as he is constantly dropping feathers behind him as he walks along his journey. He's definitely the most moral character in the novel, and I'd venture to say the hero. What's your favorite scene from your novel? Could you please describe it? My favorite scene is too close to the end to tell; it would give too much away! You'll just have to read and find out.

Book description:
In this stark Acid Western, the dark side of the oft-glorified Gold Rush period in California is revealed when the Narrator, a nameless, fragile man in search of salvation, witnesses the brutality of western expansion. On a journey to meet up with his wife, who is taking care of her ailing mother, the Narrator witnesses the crossing of paths between a Native American man on a moral quest to right the wrongs of the Gold Rush and a desperate, fearsome stranger who has lost everything in his quest for gold. Along the way, the Narrator’s sensibilities shift and change, and his dark and troubled past emerges in glimpses he struggles to repress. Ultimately, he is left with a decision that will change not only his own life, but the lives of those around him.