REVIEW: The Sword from the Sky / R. Janvier del Valle 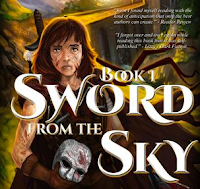 PACE
While the plot isn't that fast-paced, the dialogue and world-building keep the story moving ahead at a relatively quick pace.

12-year-old Luca has a wooden leg, but that doesn’t stop him from attending the prestigious Blade School of Davi. The adopted son of Prince Druuk, Luca’s origins are shrouded in mystery. All the reader knows is that Druuk was in love with Luca’s mother, and that an encounter with a dark entity left Luca’s leg crushed when he was an infant. The Sword from the Sky follows Luca as he faces trials at the school. Then, a mysterious woman arrives claiming that she’s his aunt and therefore has custody of him. She comes from a sunless land, and she brings with her an army of shadowy warriors with the goal of shrouding the land of Bune in eternal darkness. Luca must stop her before she plunges his world into eternal night.


Sword from the Sky’s main strengths lie in its world-building. R. Janvier Del Valle has created a richly detailed epic fantasy world with its own history, mythology, and magic system. The Blade School of Davi comes to life with skilled masters and eager students, and the mystical elements, such as the guardian star being that watches over Luca, are fascinating. Del Valle has no shortage of imagination, for sure. Much of the book is devoted to creating and developing this world rather than strictly advancing the plot. Nevertheless, it’s a fairly fast-paced read. Many scenes consist primarily of dialogue, which switches between the archaic style of classic fantasies and contemporary slang.


Luca is an easily likable main character. He doesn’t let his wooden leg slow him down. In fact, it’s easy to forget that he has one, since he’s so determined to keep up with the other students. Even when it becomes something of a disadvantage, he never uses it as an excuse. He’s a classic heroic character, and he’s mature well beyond his twelve years. Vohro, a deaf swordsman whose eyesight has developed to almost supernatural levels, is another interesting character. He is, in many ways, a role model for Luca – someone who didn’t let his disability keep him from becoming a master of combat.


There are plenty of action scenes in this book, culminating in an epic battle between the shadowy warriors and the Davinian swordsmen. Del Valle writes in the fanciful style of classic epic fantasies, and for the most part writes in third person omniscient, showing the points of view of multiple characters in each scene. The writing forms a atmospheric texture around the story, surrounding the reader in the myth and magic. My one criticism of the writing is that every so often, a modern reference would pop up (like to a cubicle or a jackhammer), which, alas, reminded me that I’m not actually in Bune. It’s clear from the descriptions that Del Valle loves molding words to create rich images. For example, here’s a description that stuck out to me:


“An amber dawn crept into the embracing arms of the horizon, but unlike other days, the sun had awoken exhausted, weak from the dizziness of the lurking fog.”


The plot of Sword in the Sky meanders somewhat; it’s not immediately clear what the story’s trajectory will be. However, there are enough mysteries and adventures to keep things rolling forward, even without a clear goal. What we, the readers, do know is that Luca is a chosen one of sorts (even though he doesn’t know it), and while he’s busy worrying about his school and his crush a beautiful but somewhat prickly girl, dark creatures are after him. The book ends with a cliffhanger (in the middle of a scene, in fact!).


Sword in the Sky is an entertaining story set in a fanciful world of swordsmen and magic. Despite it’s apparent length, it goes by really quickly, thanks to a lively setting and interesting mythologies.

THE NITPICKY STUFF
This book is well-edited. I spotted a handful of typos, but nothing distracting.

This book contains some fantasy style violence, but it's pretty mild. It is suitable for young audiences.

AUTHOR INFO
R. Janvier del Valle holds a Bachelor of Business Administration from Kennesaw State University and a Master of Theological Studies from Spring Hill College. He has worked in the Advertising, Marketing, and Communications industries for over ten years and has taught a number of classes in philosophy and theology to adults as well as children.

He resides with his wife and daughter in Georgia. When he isn't writing, he's sleeping. And when he's not sleeping, he's spending time with his family, running, hiking, hitting the gym, watching movies, buying overpriced one-sixth scale action figures, studying and reading philosophy and theology, and most of all, collecting pointy, shiny things that tend to gleam of a certain silver whenever exposed to the moonlit eventide.