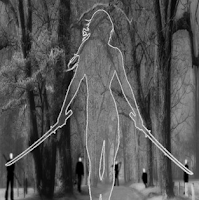 Days of Love and Blood is hard to put into just one category. While it takes place in a post-apocalyptic future and has elements of a classic zombie horror story, much of it centers on the human element. Parts of it also read like a romance novel.

PACE
This book isn't fast-paced plot-wise, but the narration and dialogue keep it rolling along. It's a pretty quick read, being relatively short and straightforward.

CONTENT REVIEW
In the not-too-distant future, the mysterious Demon Virus wipes out the majority of the human population. Those it doesn't kill, it turns into mindless zombie-like killers, known as "homicidals." Carson, a young mother, is among the tiny population lucky enough to be immune to its effects. After her husband is killed by homicidals, she drives across the country with her son, a toddler named Ronan, in hopes of finding her parents. What she finds instead is a small community of fellow unaffected survivors.

Days of Love and Blood is a hard book to categorize. The majority of the novel details the day-to-day struggles of Carson and the community. They must gather what they need to survive while warding off attacks by homicidal packs. In that sense, it's a post-apocalyptic sci-fi novel. However, it also reads a lot like a romance novel. Each chapter opens with a flashback, in which Carson recalls her life with her husband. One of the first people she meets once she reaches the community is the attractive tough-guy Cooper, who initially infuriates her, but whom she soon learns is more than meets the eye. There's even a love triangle sets up when the mild-mannered Ben arrives, although he doesn't show up until pretty late in the Carson-Cooper story.

This book takes an interesting approach to zombies. Homicidals aren't reanimated corpses; they're diseased humans. But from what we see, they've lost any hint of humanity. They kill simply for the sake of killing. The moral implications of killing them are discussed in a few scenes. After her husband's death, Carson gets a sick kind of satisfaction from cutting them down. An independent woman with deadly sword skills, she's a classic tough-girl heroine who's fiercely protective of her son.

Her relationship with Cooper is an interesting one. While I personally didn't approve of her acceptance of his bad attitude, I can see his appeal as a romantic lead. Like many brooding tough guys, his jerk-like behavior is explained by a tormented past. His manly man demeanor initially clashes with Carson's self-sufficiency, but he develops a certain respect for her, and their often heated interactions are entertaining to read.

Much of this book consists of dialogue, which R.S. Carter certainly has a knack for. The characters' voices ring true, especially Carson's narration. The writing is blunt and straightforward, which both convey's Carson's attitude and keeps the pace moving along. The character development and interactions Also, there are a number of exciting action scenes in which Carson and the others face of with homicidals.

All in all, Days of Love and Blood was a pleasant surprise. It examines the human side of a zombie apocalypse, focusing on the emotional and psychological toll such a catastrophe could have. The hope, the despair, the tragedy, the need for human connection... The story has a natural flow to it, which makes it hard to put down. At the heart of this book is the question of what people must do to survive, and how that can change them.

THE NITPICKY STUFF
This book is very well-edited; I didn't find any errors.

This book contains some violence and a few sex scenes, none of which are particularly graphic but some of which may be disturbing.

AUTHOR INFO
[From the author's Amazon page]
Heretic, scifi lover, believer in aliens, slightly twisted and somewhat sleep-deprived, R.S. Carter is a new author who despises cats yet is forced to live with one and holds a random advanced degree in molecular biology which collects dust.
Posted by Mary Fan at 7:19 PM