Mike Martin, author of the Newfoundland-set murder mysery, The Walker on the Cape, talks about his novel and writing process. Visit his website. 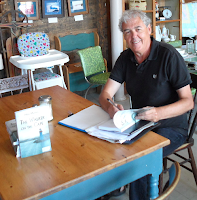