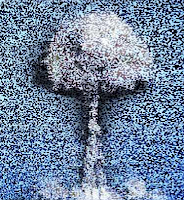 Recommended for fans of conspiracy thrillers and futuristic sci-fi.

Project Antichrist takes place in a futuristic Chicago and has a classic conspiracy thriller opening: the main character, Luke Whales, discovers a dead body in his apartment and, finding himself framed for the murder, runs from the authorities while searching for the truth. As the story moves along, the sci-fi elements begin trickling in—an evil corporation, mysterious aliens, higher planes of existence.

Project Antichrist ends with something of a cliffhanger. While the mysteries are for the most part explained by the end, the consequences are yet to be dealt with.

PACE
Project Antichrist dives into the mystery early on and keeps up a fairly frenetic pace throughout as each answer leads to more questions.

PERSPECTIVE
This book opens with Luke’s first person past narrative, then rotates between his point of view and the third person limited perspectives of several characters, such as the FBI agents chasing him. Each time a chapter is written in first person, it’s Luke’s point of view.

CONTENT REVIEW
Luke Whales, a TV show host living in near-future Chicago, seems to have it all—money, looks, success. But behind the scenes, things aren’t so rosy. Divorced and still pining for his ex-wife, he takes antidepressants to make the world seem like a better place. One day, he comes home to find a dead body in his apartment and his personal gun missing. Realizing that he’s being set up, he flees.

From there, his circumstances only become more bizarre. Although Project Antichrist begins with a seemingly straightforward Fugitive-like plot—innocent man runs from the authorities while searching for the real killer—spirals out into a tangle of mysteries involving the powerful corporation behind the antidepressants Luke (and a huge chunk of the nation) takes and mysterious aliens with a sinister agenda.

Luke is an easy protagonist to root for, despite, or perhaps because of, his many flaws. Years of being a celebrity have made him arrogant, self-centered, and entitled, but at the center of it all, he’s still just a guy trying to figure things out. His bewilderment and considerable cluelessness when it comes to the whole fugitive situation are rather endearing. After all, he’s no superhero. He’s not even an everyday hero. And he’s a bit volatile—one of the first things he does in the book is march over to his ex-wife’s house and clock her new boyfriend.

As the story unfolds, Kravchenko introduces the reader to a number of interesting characters. There’s Iris, a hipster-like young woman with grand ideas and a bit of an attitude, who helps him flee the FBI simply because he needs her. And Paul, Luke’s friend from his pre-fame days who may or may not hold a grudge against him. And FBI agents Brighton and Brome, the latter of whom begins questioning the seemingly straightforward nature of the murder case he investigates.

Then there’s Dr. Young, a character who doesn’t have a lot of “screen time” compared to the other characters, but whose knowledge and thoughts shape the themes of the novel. Part priest and part psychiatrist, he knows more about what’s going on than perhaps he should. He’s the one who introduces Luke to the idea that there’s more going on than a simple murder. One of the most interesting sections in the book is the scene in which Dr. Young philosophizes about the nature of the antidepressants that have become so prevalent in this futuristic United States, a passage that serves as a commentary for our real-life increasing dependence on behavioral drugs.

And then things get apocalyptic. The title of the book is Project Antichrist, after all. The notion that the ones humans have thought of as gods are in fact aliens so powerful, they seem divine, isn’t entirely new to sci-fi, but Kravchenko gives the idea his own twist. Dr. Young acts almost like a prophet, telling Luke of things that are and things to come that are not only unbelievable, but borderline inconceivable. How Luke fits into this grand concept is slowly revealed throughout the course of the novel.

Along the way, Luke gets himself into plenty of trouble—chases with the police, an insane plot to rescue his friends from the clutches of the evil corporation, encounters with frightening, almost supernatural alien beings. Caught in the epicenter of conspiracies and puzzles, he struggles to reconcile what he sees with what he can believe. By the time Project Antichrist reaches its cliffhanger of a conclusion, normalcy is but a distant memory. In Project Antichrist, Kravchenko has crafted a thrilling sci-fi mystery with fascinating concepts and exciting action scenes. I had a hard time putting this book down because I simply had to know what was going on, and what would happen next.

THE NITPICKY STUFF
I found a handful of typos and errors while reading, but nothing too distracting.

AUTHOR INFO
Pavel Kravchenko grew up in Ukraine and moved to the United States at the age of twenty. He has held a number of different occupations and has published several short stories. Project Antichrist is his first novel. He currently lives in Illinois with his wife and two children.
Posted by Mary Fan at 6:10 PM