REVIEW: The Walker on the Cape / Mike Martin 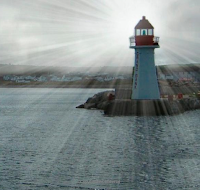 The Walker on the Cape follows the form of a classic whodunit. It opens with a dead body and follows Sergeant Winston Windflower as he investigates the murder. The story is set in a small fishing community on the East Coast and contains a lot of local color.

PACE
The Walker on the Cape is a moderately-paced murder mystery. The questions of “what happened” and “who’s the killer” keep the plot moving forward while Windflower’s interactions with the locals allow the reader to enjoy the setting.

PERSPECTIVE
The majority of this book is written from the third person perspective of Windflower and rotates to other characters’ points of view. At times, it takes on a more omniscient narrative distance.

CONTENT REVIEW
The Walker on the Cape opens as every good murder mystery should: with a dead body. The body is that of Elias Martin, an elderly man known for taking long strolls along the cape. Investigating the death is Sergeant Winston Windflower, who recently moved into town. When Windflower discovers that Elias was poisoned, he begins an investigation into the old man’s past to find the killer. Elias led a seemingly quiet life, but as Windflower learns more, he soon realizes that perhaps the old man’s life wasn’t so peaceful after all.

Windflower is an amiable and easily likable detective figure. He’s a classic good guy—determined, kind-hearted, and tough when he needs to be. Having been born and raised on a remote Indian reservation, he finds living in the small fishing community of Grand Bank to be quite a change from what he’s used to. His interactions with the locals, including a winsome café owner, bring the setting to life. In fact, it is this local color that makes The Walker on the Cape memorable.

Martin writes with a charming lilt reminiscent of classic cozy mysteries. The characters are a quirky bunch, such as the over-enthusiastic young policeman, Constable Eddie Tizzard, and the blustering Inspector MacIntosh. Between the investigation scenes, Windflower discovers his affections for the aforementioned café owner, a delightful woman name Sheila who introduces Windflower to the local comforts.

For a taste of Martin’s writing style, here’s the opening paragraph of the first chapter: “Even in an ordinary life the most extraordinary things can happen. Every morning for the past eleven years Elias Martin has had his breakfast of hot porridge and thick molasses bread smothered in partridgeberry jam. Then, rain or shine, he began his solitary walk from his small blue house on Elizabeth Avenue in Grand Bank, Newfoundland, down through the Cove, and until the winter snow made it impassable, up over the hills to the Cape.”

Such descriptions and charm are carried out throughout the novel, which retains a cheery atmosphere despite the bleakness of Windflower’s job. Like all cozy mysteries, the detective figure in The Walker on the Cape is removed from the danger and spends the majority of the investigation interviewing suspects and witnesses or stewing in his own thoughts. Things take an interesting turn about halfway through the book when corruption is unveiled and an arrest is made.

In terms of the plot, Martin has constructed a well laid-out web of suspects and motives, and he certainly seems to know his way around a police procedural. From the forensic reports to the ins and outs of the Royal Canadian Mounted Police, he depicts a believable world of crime scenes and investigators.

All in all, I found The Walker in the Cape to be a fun and lighthearted read. It’s the kind of mystery that lets one delve into the various possible scenarios, revealing various backgrounds and stories along the way. The reader gets to explore the little town of Grand Bank along with Windflower, experiencing all its delights and hospitality.

THE NITPICKY STUFF
I found a number of small errors such as typos. Also, and this is really nitpicky, Martin tends to write in long sentences, often unbroken by commas.

This book is fairly G-rated in terms of sex, violence, language, etc.

AUTHOR INFO
Mike Martin was born in Newfoundland and now lives in Ottawa, Ontario. He is a longtime freelance writer and a member of Ottawa Independent Writers, Capital Crime Writers, the Crime Writers of Canada, and the Newfoundland Writers’ Guild. The Walker on the Cape is his first full fiction book.

RELATED: An Interview with Mike Martin
Posted by Mary Fan at 9:19 PM