It's cover reveal day for Windborn (Fated Stars, #1) by yours truly! This sweeping YA fantasy will be released on February 11, 2020 by Snowy Wings Publishing. An epic adventure across an enchanted fantasyland, this story follows air nymph Kiri on her desperate journey to escape from dark magicians. The cover painting was done by Anne Drury, with titles by Story Wrappers.

This book has been a long time coming, y'all. I dare say I first started dreaming about the world that would eventually become this book when I was a little kid. Like loads of other little girls, I loved tales of enchanted forests and mythical beings and epic adventures, and I soon started weaving my own versions in my head. I'd spin long, epic storylines in my head in the moments before drifting off to sleep or when staring out the car window. When I started writing, I left these fairytale adventures behind to focus on more deliberately plotted stories. But they stayed with me, and Windborn was my first attempt at bringing their world to life. 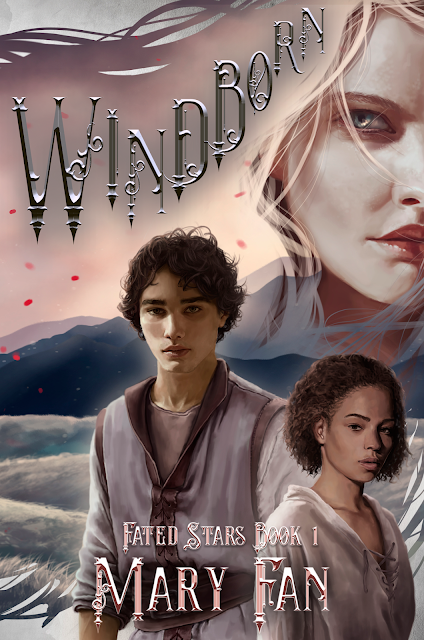 Now, I know some people aren't too keen on full-wrap reveals, but Anne specifically designed this cover to be a full-wrap hardcover (and cropped it later for the ebook). Here it is, in all its glory:

The Age of Fire is coming. It’s written in the stars.

Trapped by dark magicians, the air nymph Kiri is running out of time. Like the rest of her kind, she’s bound to her homeland, and if she doesn’t return in seven days, she’ll die. Her only hope is in the magicians’ young apprentice, Darien, whose fierce gaze belies a kind heart. Despite her warnings, he helps her escape, and Kiri soon finds herself fleeing from relentless pursuers who will stop at nothing to recapture her and kill the boy who dared defy them.


With the magicians hot on their trail, Kiri and Darien embark on a treacherous journey through dangerous lands. But she soon learns that there’s more at stake than her own life. An ancient evil is stirring, one foretold to consume the world with fire. And Darien is at the center of it—though how, she doesn’t know.


Meanwhile, the clock is ticking on her life, and unless she can make it back to her land, she won’t live long enough to unravel the dark puzzles surrounding the intriguing, secretive young man—or stop the monstrous force bent on destroying everything.

Add it on Goodreads: https://www.goodreads.com/book/show/36668159-windborn

Mary Fan is a YA and sci-fi/fantasy author based in New Jersey. Her books include Stronger Than a Bronze Dragon (YA steampunk fantasy, Page Street Publishing), the Starswept trilogy (YA sci-fi, Snowy Wings Publishing), the Flynn Nightsider series (YA dark fantasy, Crazy 8 Press), and the Jane Colt trilogy (a space adventure series from Red Adept Publishing comprising Artificial Absolutes, Synthetic Illusions, and Virtual Shadows). In addition, she is the co-editor of the Brave New Girls YA sci-fi anthologies about girls in STEM, which aim to encourage girls to explore STEM fields and raise money for the Society of Women Engineers scholarship fund.

When she’s not writing, she can usually be found at choir rehearsal, at the kickboxing gym, or falling off a flying trapeze.