An interview with author Elika Ansari. 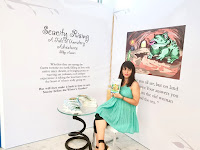 Hi there, thanks for having me. As cliche as this may sound, I have been writing for as long as I can remember. I came up with my first poem in Persian even before I could actually write; I basically dictated it and my mother wrote it down for me. I have also written short stories, reviews, and articles, but I think writing a book was probably the most challenging task I have undertaken as an author. But now that all has been said and done, I am really glad I finally did it!

Basically, the desire to see what happens in the fragments of stories I have in my mind. People think that it is mainly the reader who is transported into another realm upon picking up the book. But I feel the writer has the most enriching experience of all. When stories come to me in snippets, one of the most rewarding feelings I get is when I manage to line these snippets up into a coherent plot.

The first idea I had was actually a fantasy story called ‘The Jewel Kingdom’. It is a story about how a kingdom is split up between royal siblings upon the King’s death, each inheriting a land to call their own kingdom. But the youngest brother, Malecai, unsatisfied with the part he receives, decides to invade his other siblings and take it all for himself. Since the world had been living in peace for hundreds of years, and had all but forgotten the ways of war, the other kingdoms are left vulnerable to the attack. The only way to save the kingdoms from Malecai is for the siblings to seek out the protection of the gods, which is not easy, as they had, long ago, gone into hiding in different corners of the earth. So they embark on an adventure to find them and bring Malecai to justice.

This story has actually never, to this day, been written into a book. But now that you have reminded me, I feel I should really get started on it!

Lee the turtle, from my debut children’s book, ‘Seacity Rising: A Tale of Unwatery Adventures’. I like her the most because her character comes across as very tough and unyielding at first, but then we get to see her kinder and more vulnerable side later on in the book. Makes you think twice about passing judgement!

My favourite chapter in ‘Seacity Rising’ is chapter 7, ‘Tiny Wars’, where we get to see a bunch of little ants with attitude boss the Seacitians around. The kind-hearted Seacitians, in turn, try to negotiating peace between the warring ant colonies, the AAU and the UAA, which they find difficult as both sides turn out to be so belligerent. I like it because I find it to be the silliest chapter in a way, and who doesn’t enjoy silly?

What's your favorite part of writing? Plotting? Describing scenes? Dialogue?
Definitely dialogue, because it just comes more naturally to me. I could easily write a whole chapter using dialogue only, but then, of course, that would not be a very good chapter, I suppose.

I wish I could answer that, I really don’t know. It took me a month to get the first draft done the last time, but of course that was the draft that could have never seen the light of day. After that, I revisited the draft on and off for a year while working full-time; redrafting, editing and tweaking it, while querying publishers at the same time. As for the process, I am trying to think what helped me last time as I am writing the second part of the Seacity series, and I can’t really remember, to be honest. I think having a good plan for each chapter really helps drive things forward, though, but that doesn’t mean I always stick to my own advice.

What is it about the genre you chose that appeals to you?
I try to focus on Middle Grade and Young Adult, though sometimes I expand out and write for adults as well. The reason I am drawn more to kid lit, and particularly the fantasy genre, however, is that I often find them more upbeat in general and more permitting to challenge the limits of our imagination.

Angela Carter’s feminist rewriting of fairytales inspired my writing throughout my entire adolescence. And after that, I would say Tahereh Mafi’s ‘Shatter Me’ series really resonated with me. I also find JK Rowling to be hugely inspirational, but then again, who doesn’t?

Absolutely. I often even talk about my characters in the third person, for instance, if someone asks me, ‘Why did Babak the frog decide to do that?’ I’ll be like, well, that’s his decision to make, I can’t interfere with that.


Seacity Rising: A Tale of Unwatery Adventures is the first in a trilogy series, which touches on themes of friendship, selflessness, self-development, trust, diversity, displacement, and climate change, as well as other important ideas that children should be familiar with, and it does so in an endearing lens of fantasy and adventure.

Imagine your world is so incredibly small and sheltered, that you can only begin to fathom murmurs of adventures abroad in storybooks and legends of old. It may be a dull life, but it is certainly a familiar and comfortable one, and one that does not easily invite danger. Until now.

When the underwater creatures of Seacity pond learn that their home is in danger, they decide to investigate further by doing something no one has ever done before - go up to land to seek the answers they need. An unlikely team of two royal turtles, a genius goldfish and a timorous frog are then assembled to embark on a series of adventures. Whether they are racing the fastest tortoise on earth, falling in love with native mice theatre, or bringing peace to warring ant colonies, each unique experience is taking the group of friends closer to the heart of what is really going on. But will they make it back in time to save Seacity before the Winter’s Slumber?

Elika Ansari is a writer, social scientist, and humanitarian professional. She has been working with MSF (Doctors Without Borders) in what has been recently described as ‘the world’s worst refugee camp’ in Greece for the past year, and as such she has had the (mis)fortune of hearing many touching stories about hardship and perseverance. She tries to focus her writing on globally relevant issues with the hope of one day making a difference through the stroke of the pen (or click of the keyboard), however small that may be. She loves writing anything from essays and articles to children’s fiction, and she does not shy away from the occasional rants about society’s downfalls. Ansari has published 100+ reviews, articles, and short stories, and her debut children’s book, ‘Seacity Rising: A Tale of Unwatery Adventures’ was published on June 6th, 2019 by Black Rose Writing.