COVER REVEAL: Flynn Nightsider and the Edge of Evil / written by ME

Hey everyone! Happy Halloween! And on this spooky day, I'm thrilled to, at long last, reveal the spook-tastic cover of my YA dark fantasy, FLYNN NIGHTSIDER AND THE EDGE OF EVIL! It's been a long time coming, folks. I wrote the first draft of this book way, way back in 2012 (it was the second thing I ever wrote once I started writing seriously... predates everything I've published except Artificial Absolutes).

I actually organized a photo shoot for the cover back in 2013, with my sister, Angel Fan (who was in high school at the time), as Aurelia "The Firedragon" Sun, a kickass teen monster fighter, and her friend from school, Joe Rorem, as the titular Flynn, a young rebel with a unique ability that could change the fate of the world. Now, those photos didn't turn out so well (since I was behind the camera, HAH!), so I organized a second shoot the following year, in 2014, with a real photographer (Tom Castles). And I've been sitting on 'em ever since...

Publishing delays happen, and those of who've known me for a while might have noticed that I've since switched presses. Also, those of you who saw my previous cover reveal, for STARSWEPT, might've noticed that Angel posed for that one too. Funny thing is, even though the covers are being revealed within a few months of each other, the shoots actually took place three years apart.

Why'd I do a custom shoot for Flynn and Aurelia? Well, first of all, as you probably know, I have a thing for faces on covers, and it's really hard to find the right stock photo. I probably would have able to find one for Flynn, but Aurelia? She's East Asian, and stock photos are notoriously, problematically, frustratingly white. Also, Angel actually helped me brainstorm the world of Flynn Nightsider, and as an in-joke I wrote Aurelia to look exactly like her. Naturally, that meant I had to put her on the cover ;-)

Did I care that now, two of my characters are physically identical on their covers? Nope, because their personalities and abilities are so, so different, and the photos reflect that. Angel's basically two totally different people on the two different covers; one's a shy, romantic classical musician, and the other's a tough, no-filter action heroine. I have a feeling if they ever crossed paths, things would get pretty interesting :-P

Anyway so that's the background! And now, here's cover, done by the ever-talented Streetlight Graphics. 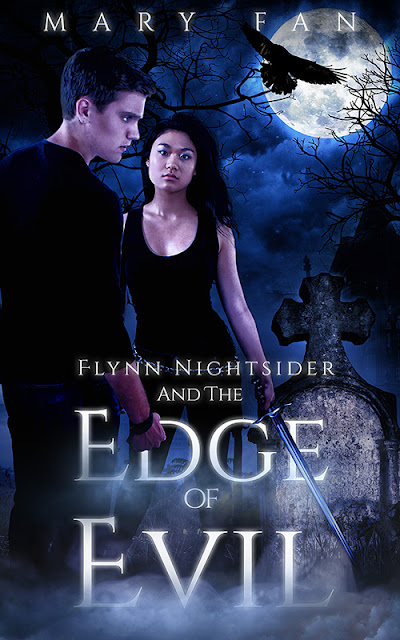 Isn't it cool?? I love how it turned out. Streetlight did an amazing job of capturing the creepy, dark fantasy atmosphere I was going for. And Tom Castles did a great job photographing the kids (they were both teens at the time... now, of course, they're in college... they grow up so fast...). This shoot was pretty straightforward, since it was shot in Tom's studio. I asked the kids to bring their own wardrobe - any dark colors would do, essentially. And since the background was going to be photoshopped anyway, we didn't have to worry about props except for Aurelia's swords. Naturally, I had swords lying around (though the one pictured had to get photoshopped anyway because the original blade's angle was off, but at least having one meant her grip was believable).

Just for fun, here are some behind-the-scenes pics:

Break the enchantments. Find the truth. Ignite the revolution. 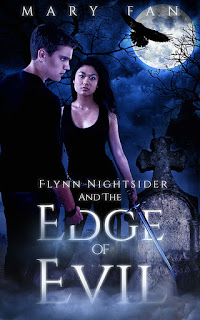 A century ago, the Enchanters defeated the evil Lord of the Underworld, but not before he’d unleashed his monsters and ravaged the earth. The Enchanters built the Triumvirate out of what remained of the United States, demanding absolute obedience in exchange for protection from the lingering supernatural beasts.

Sixteen-year-old Flynn Nightsider, doomed to second-class life for being born without magic, knows the history as well as anyone. Fed up with the Triumvirate’s lies and secrecy, he longs for change. And when he stumbles across a clue that hints at something more – secrets in the dark, the undead, and buried histories – he takes matters into his own hands.

Before long, Flynn finds himself hunted not only by the government, but also by nightmarish monsters and a mysterious man with supernatural powers … all seeking him for reasons he cannot understand. Rescued by underground rebels, he’s soon swept up in their vision of a better world, guided by a girl as ferocious as the monsters she fights. But as the nation teeters on the brink of revolution, Flynn realizes three things.

The rebellion is not what it seems.
Flynn himself might be more than he seems.
And the fate of the world now rests in his hands.

Add it on Goodreads: https://www.goodreads.com/book/show/18481757-flynn-nightsider-and-the-edge-of-evil

Check out the two prequel novellas set in the Flynn Nightsider universe, The Firedragon and Firedragon Rising.
Posted by Mary Fan at 9:00 AM