BNG FRIDAY: The Non-Existence of Gravity

Today, I'm spotlighting one of the stories that will be featured in the anthology: Steph Bennion's space adventure "The Non-Existence of Gravity." This clever, quirky tale of mishaps in space stars Cethlenn, a teen girl working with her kooky, brilliant Aunt Morrigan as a space scavenger. The two spend their days salvaging parts from derelict spaceships and teasing each other with brainy games. Morrigan's latest asks Cethlenn to provide a theory for why gravity might not exist and, against common sense, Cethlenn actually manages to provide an answer—though a highly implausible one. Hoping to impress her aunt by proving her theory right—or at least proving it's not as wacky as it sounds—Cethlenn gets the idea to experiment on a derelict freighter's faster-than-light engines... which does not go well, as you might imagine. I was immediately drawn in by the story's cool premise (who doesn't love a good space story?), and Cethlenn was just the kind of heroine we were looking to feature in the anthology. She's smart and independent—though far from perfect—and isn't afraid to take matters into her own hands. Can't wait for y'all to meet her!

The Non-Existence of Gravity 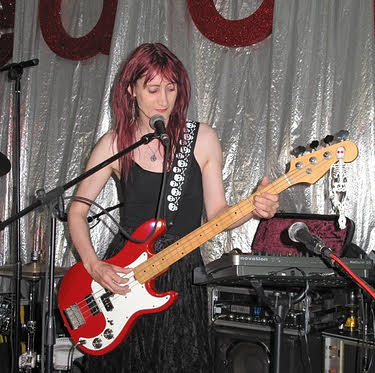 Cethlenn considers herself lucky to be working with her Aunt Morrigan, a crazy yet talented engineer and self-styled Rocket Queen. That is until a dangerous scrapyard experiment threatens to turn a derelict freighter into a deadly singularity bomb…

Steph Bennion is an English writer, civil servant and occasional musician, born and bred in the Black Country but now living in Hastings after too many years in the black hole of London. Her science fiction stories are written as a reaction to the dearth of alternative heroes amidst bookshelves swamped by tales of the supernatural. For every aspiring vampire or wizard, the world needs an astrophysicist, an engineer, or at the very least someone who can make the trains run on time. "The Non-Existence Of Gravity" shares the same fictional universe as her Hollow Moon space operas for young adults (and adults young at heart); City Of Deceit, the third novel in the series, was published in 2016.

"Jobs in mathematics, science, technology and engineering should be open to all. I want to live in a world where everyone gets a chance to shine, no matter who you are or where you're from."