Today, I'm spotlighting "The Maker's Handbook," a story by returning Brave New Girls author George Ebey, who took us to Mars in Brave New Girls: Tales of Girls and Gadgets. "The Maker's Handbook" is a quieter tale that takes place in a post-apocalyptic world where technology is all but forgotten. Enola is a young laborer living alone with her mother after the "dirty water disease" claimed her father. All she knows is hard work and drudgery in a harsh, rural dystopian province. But a wanderer named Sebastian—condemned as an outlaw for refusing to live under the province's laws—offers her a glimpse at the world that once was through his fanciful tales of technology and medicine. After he bequeaths her the titular Maker's Handbook, Enola goes on a journey toward discovery and liberation, risking everything to help carve out a better future. I loved that this story took a softer approach to sci-fi, and that its heroine fights the power through subtle subversion. The story's spare, elegant writing style perfectly matches the aesthetic and Enola's personality. Looking forward to sharing it with y'all when the book releases!

In a post-apocalyptic future where technology is shunned and people work as slaves for the good of their province, a young girl named Enola meets a mysterious wanderer who puts her on the terrifying and liberating path. 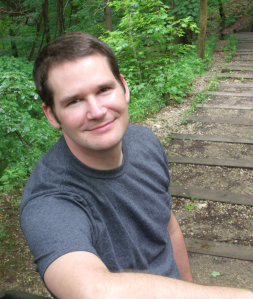 George Ebey got his start by taking his once-vast collection of action figures on epic journeys though countless lands full of exotic wonders and hidden dangers.  Today, his action figure collection is much smaller, though several still stand guard on his writing desk, ready to take up arms and march into the fray at a moment’s notice.  George was born and raised in Ohio, where he still lives with his wife and an ornery cat named Ollie. When he’s not writing or playing with his action figures, he enjoys being outdoors, studying history, and searching for new and interesting places to explore.

"In a perfect world, the problem of gender inequality wouldn’t exist.  I hope that Brave New Girls will help bring us one step closer to that world."