An interview with Jake Parent, author of Cristina. 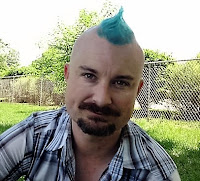 I’ve definitely had more than a few ups and downs in life, and I think that, more than anything else, provides the raw material for my work. All my characters are struggling in some way. It could be external or internal, but all of them are imperfect in one way or another, just like the rest of us.

I’ve always wanted to be a writer. Since I was six years old at least. But deep down I’m always a reader first.  To me, there’s no better way to stir the soul than through the power of the written word.

I used to live in a small California beach town like the one the story is set in. The place was paradise, but there was also a kind of seedy underbelly of people addicted to drugs, homeless, and just barely hanging on. So it always provided plenty of fodder for imagining strange goings on.

Cristina is definitely my favorite character. She’s a bad ass single mother who, despite having gone through hell, is still able to find a way to love her daughter and life in general. The book is dedicated to single moms, because I can’t think of anyone who is more courageous.

I’m pretty proud of the ending. Obviously I can’t describe it without giving away a lot, but it’s always my goal as a writer to come up with stories I’d like to read myself, and this one certainly accomplished that.

Good writing is a symphony of emotions, one that takes patience, creativity, observation, love, and dedication. When I find that balance, there are few things I enjoy more in the whole world. But I’m not sure there’s any one thing that stands out. I really love everything about it.

I think most good books are written in 3 or 4 months. Anything more than that and the world you’re creating gets stale or overdone. Cristina was written in 3, most of those days spent typing away with my newborn daughter sleeping on my chest.

As far as process, I’m definitely a wing it kind of a guy. I come up with an idea and then just start writing. I always tell people who are just starting out that it’s important to remember that writing is not just a form of communication, it’s also a method of thinking. So just open up that computer and get typing. See where your imagination takes you.

Above all else, I write books I would want to read. And whether its Stephen King, Bukowski, or Maya Angelou, I've always felt like a seductive setting and a compelling, driving narrative are the things that most draw me into a story. Since these are the fundamental building blocks to a good psychological thriller, there's nothing I like to write more.

I read widely and books are a huge part of my life. My storytelling is also influence by a wide array of artists of all types. A few of them are Charles Bukowski, Stephen King, Maya Angelou, John Steinbeck, Honoré de Balzac, Ella Fitzgerald, John Sanford, Jimi Hendrix, Ernest Hemingway, Greg Graffin, Pablo Picasso, Rickey Henderson, and Mac Dre.

If I finish my day of writing and haven’t experience the feeling of surprise, I consider the effort mostly failed. Only when I’m shocking myself, trying something new, doing things I myself never even thought of, do I really think I’m putting in maximum effort to tell an original and compelling story.

Sign up to receive alerts about new releases from Jake Parent (and that’s the only thing that ever gets sent to this list): http://eepurl.com/bXzepr