An interview with Diana Strenka, author of BLACKBEARD'S DAUGHTER. 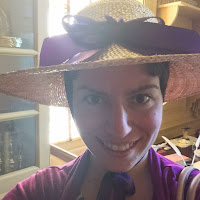 Thanks for having me!  I've written several short stories on Amazon and Smashwords centered during different eras in history (such as Tudor).  I have also authored many nonfiction articles on Hubpages, so feel free to look me up if you like!  My first novel, Blackbeard's Daughter, was published this past February.

I have always had a passion for writing!  When I was in grade school, I published my first novel.  It was entitled The Missing Diamond Necklace, and it was very much related to Carmen Sandiego.  When my third grade teacher read my book, she was extremely impressed.  I was so proud of myself for what I had accomplished!

I always had an interest in Blackbeard, and I wanted to explore the man behind the legend.  What was he really like? We know that Blackbeard was originally of aristocratic origins, as he was capable of both reading and writing.  Through the eyes of his daughter, we get to view beyond the veneer that is Blackbeard the pirate.  The story really evolved from there, as the sheer brutality that was life in the colonial era emerged.  I wanted my story to be historically honest, and not a sugarcoated version of what people experienced back then.  I will allow you all to be the judge of whether or not it is true to the period of which he lived!

My favorite character is Margaret.  She is a strong young woman who overcomes the incredible hardships of the era and rises above them.  Margaret is very independent, much like her father, and very unlike the women of the time.  That's what I admire about her the most; she's very much a modern woman.  I think she gets her free-thinking streak from her father, who always taught her to think for herself.  He's very egalitarian in a time when the man ruled over the family, and this freedom allows Margaret to find herself.  Deep in her heart, she just wants to give and receive love.  This desire manifests in her wish to have a family of her own.

My favorite scene from Blackbeard's Daughter is when Margaret loses her child.  The reason why I chose this scene is that we finally get to see Margaret give in to her rage.  Prior to this, she holds back from expressing this side of herself.  She has  control over her emotions, even in situations where she experiences inexplicable helplessness (such as when she is held for ransom).  However, in that moment of unspeakable pain, Margaret unleashes everything.  She lets all her feelings go, no judgment, no holding her cards close to her chest.  She allows it all to flow freely, losing her sense of morality and conscience which has for so long held her back.

My favorite part of writing is becoming one with my story.  There is no separation, in my mind and heart; I am the story, and the story is me.  The fun of writing in this manner is that you can really experience it firsthand, and put your own authentic self into it.  You can really give it your all!

It really depends on the book.  For example, I am currently writing a science-fiction dystopian that is requiring much more thought and outlining in order to maintain cohesiveness.  However, typically, I wing it.  I go with the flow of the story, and let the characters (and my heart) lead the way!  Stories can take a few months to several months, depending on if I am also doing promotions and marketing at that time!

I love historical fiction because history has been a passion of mine for quite some time!  History is interesting and different; it's fun to put yourself into another time and place.  I think there is so much we can learn about our past!

I love Carolyn Meyer's historical fiction collection.  She writes about the Tudor period, which is very much of interest to me!  I love King Henry VIII, and the drama that seems to follow his reign and that of his children!  Each of her stories (all first person point-of-view) allowed me to crawl inside the character's head and live her world.  I got to be Queen Anne Boleyn, Queen Catherine of Aragon, and Queen Mary I!  It was so fun!

The biggest shock for me was how many of my characters came to perish due to the natural elements.  I never foresaw this much death when I first began writing Blackbeard's Daughter, but it evolved in this manner.  It makes sense for characters to die from something as common as illness, but it makes Margaret's world even more vulnerable and tenuous.  She can't even trust nature, so what (and who) can she really and truly trust?

Biography:
Diana has a Bachelor's degree in Psychology, and a Master's Degree in Education.  In addition to Blackbeard's Daughter, she has authored and self-published several short stories on Smashwords and Amazon.   One such title is Rescuing the Titanic, an account of the Californian's arrival prior to the sinking of the Titanic. In the nonfiction realm, she has published several articles for HubPages on medieval and renaissance historical figures. She enjoys spending time with her cat, Moe, and drinking tea.


Colonial dreams have become piratical nightmares. Margaret takes one disastrous turn after the other as she confronts the perils of murder, war, and revenge. When her father decides to pursue criminal mischief aboard a pirate's vessel, Margaret joins him in an effort to save his life. Will she weather the storms ahead, or will they destroy her?
Posted by Mary Fan at 12:00 PM