What can a dog possibly know about love and romance? 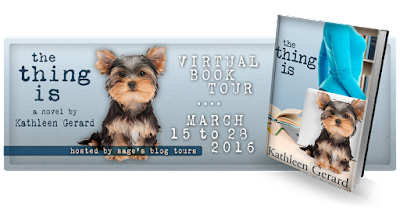 What can a dog possibly know about love and romance?

by Kathleen Gerard
author of THE THING IS

Prozac, a Yorkshire terrier, who narrates a portion of THE THING IS by Kathleen Gerard, shares some of his "doggie" insights about living with a romantically challenged romance writer.

I know what you're thinking—what the heck does a five-pound dog with a brain the size of a peach pit really know about love and romance? Well, don't kid yourself. With my doleful eyes and moist little nose... and the glee-filled wag of my stubby, docked tail...why, I'm cuteness and love personified. Most everyone I meet (outside of the postman) falls madly under my spell!
Of course, Meredith Mancuso--the romantically challenged romance writer I'm forced to live with in, THE THING IS--doesn't perceive me in this way. I don't think you've ever met anyone more determined to stick to a 'life-without-romance' plan—on the page or off—than poor, lonely Meredith. But dogs, we're smart, adaptable creatures. And my being a Spirit Guide Dog—my job is to help people move on to new levels of living—I'm even more adaptable than your average, spoiled four-legged fur-baby.
My job is to help Meredith transcend her grief. You see, her fiancé died and ever since, she's been unable to shake the grip of her sorrow. But once I come unwittingly into her life, I quickly size her up and determine that it's my job to help return her to the land of the living and ease back into the world of romance.
How do I do this, you ask?  Well, you'd have to read the book. But I'll tell you this… With some humans, a dog often has to take a hard line and be a little devious. With others, we know to back off and proceed with caution. In the case of Meredith Mancuso, it takes a combination of both. And because I'm something of a "Human Whisperer," I soon devise a clever plan (through a comedy of errors) to launch Meredith into Phase Two of her life by enlisting the help of some older folks in Phase Three of their lives at an independent living facility where I visit each week as a beloved therapy dog.
Okay, so your next thought is...Since when are independent living facilities hotbeds of romantic possibility for 30-something, single romance writers? Well, hold your horses, and your dogs and cats, too! Any Spirit Guide Dog worth his Milkbones knows that with someone the likes of Meredith Mancuso, baby-steps to love—the lightness and sweetness of romance—often work best in trying to navigate the stormy seas of romantic vulnerability. In the end, adult children and relatives often visit older people and check in on them. If someone's in the right place at the right time—especially with a clever Spirit Guide Dog on her side—it's very possible love can bloom…catch my drift?

To spend more time with Prozac and Meredith, read THE THING IS by Kathleen Gerard. Also be sure to visit http://www.thethingis-thenovel.blogspot.com to learn more 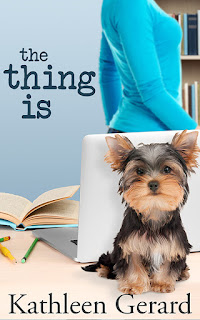 Meredith Mancuso is depressed. Ever since the death of her fiancé, she has shrunk from the world. Even with her successful writing career, she's not motivated to work. When her sister, Monica, begs for a favor, Meredith wants nothing more than to say no. But she’s ultimately roped into pet-sitting an orphaned Yorkshire terrier named Prozac.

Blessed with spiritual wisdom and a high IQ, Prozac is an active pet therapy dog. To heal broken-hearted Meredith, he rallies his fan club at Evergreen Gardens, an independent living facility, where he visits each week.

Prozac and the community of resilient older folks challenged by losses of their own propel Meredith, often against her will, back into the land of the living. Meredith learns that most people carry some sort of burden, but it's still possible to find meaning, purpose, and joy—and sometimes, even love—along the way. 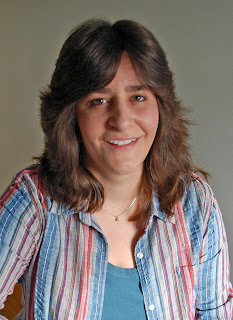 Kathleen Gerard is a writer whose work has been awarded The Perillo Prize, The Eric Hoffer Prose Award and nominated for Best New American Voices and Short Story America, all national prizes in literature. Kathleen writes across genres. Her short prose and poetry have been widely published in magazines, journals and anthologies. Her essays have been broadcast on National Public Radio (NPR).  Kathleen's woman-in-jeopardy novel IN TRANSIT won The New York Book Festival - "Best Romantic Fiction" (2011). Kathleen is a book reviewer for and a contributor to Shelf Awareness and maintains the blog, "Reading Between the Lines."
http://www.kathleengerard.blogspot.com/
On Twitter: https://twitter.com/KathleenGerard
On Facebook: https://www.facebook.com/kathleengerard.writer
On Red Adept: http://bit.ly/RAPThingIs