An interview with Kimberly Hix Trant, author of the sci-fi novel #Hashtagged.

My background as an author is best summed up in once sentence:  This is my first novel!

I’ve always wanted to be a writer. I received a degree in Journalism back in the time of long, long ago. I won a short story award and had a few things published. However, through the lense of time I can tell that fear held me back. I had a pretty good technology background and soon found myself in that industry.

Fast-forward about 30 years. After raising four kids, I finally realized that Ferris Bueller was right. Life does move pretty fast. After a bit of pushing/support form my family, I decided that I really had nothing to lose. It was time to practice what I preached and go for it.

The book started as a dinner party topic. I had this idea that social media was actually going to provide the information that robots would need to take over the world. We provided this primarily through the hashtag (#). By labeling and uploading every aspect of our lives, we were “teaching” artificial intelligence.

My husband really encouraged me to take the idea forward and to write that novel I’d always dreamed of writing.

As far as the subject goes, technology is what I know, so that part was easy. The rest of the book is based on the millions of little data points that comprise my life—influences, people, ideas, etc. Some of the names have changed and of course, I never time traveled (but would be first in line!). However, I know these places and these people. And I know that incredible heavy burden of trying to create a better world for our children’s children.  This is what worries me now. I have a large and intensely connected family. Within this, I have this precious little granddaughter who will never know the security and privacy of living a life off-line. There’s good and bad in technology.   Stories like #hashtagged are really a bit of fun—but a bit of fun intended to make a point. We need to think about what we are putting out there into the universe. It lives on.

My favorite characters are Victor and Edward, aka The Brothers Wells.  (Yes, they are named after H.G. Wells.)

Victor and Edward are fraternal twins who were part of a group known as the Dinner Club.  They are my favorites because of the total adoration they feel (and exhibit) for others as well as their eclectic style and love of formalities. Here’s a brief description:

At some point, the brothers had adopted a bit of a steampunk style, with Edward sometimes showing up at the Chicago dinners wearing a fox-collared, double-breasted wool coat and handmade goggles that made me think of a mad scientist. Victor leaned more toward European cut suits with silk handkerchiefs, a heavy walking stick topped with a crystal knob, and his long black hair swept back.

Our heroine, Maddy, is in the future and sees a huge warehouse. The door opens slowly and sees two columns of robots walking out. The robots are dressed like nannies and pushing old school prams. She can see the tips of the pink and blue blankets hanging out of the prams.

My favorite part of writing is when I just let it all go—the plotting, the effort to do it “right”, etc.—and just let the story come to me.

This book took four months. I would work all day at the day job and then write in the evenings. I was working at a client’s location and living in a hotel during the week. I would get dinner on the way to the hotel and sit in bed after dinner writing. I had a goal of 1,000 words per night. While I was at home on the weekends, I would write the plot points on a huge whiteboard and work out any problems.

I always struggled with this question. Every book I have ever read or even held in my hands has influenced me. William Gibson opened my eyes in Pattern Recognition.  Kathleen Koen taught me to love a good romance in Through a Glass Darkly.  The gentlemen of Freakanomics fascinate me (Levitt and Dubner). Barbro Lindgren, the author of the children’s book Sam’s Lamp, taught me to tell a tight story and make it count.

The Wells Brothers (whom I mentioned earlier) surprised me. I created them from a picture in a magazine. They were as I described them, along with some luggage. I think it was Luis Vuitton. I tore the picture out and just kept it around for a while. When I started to create the characters, it really took no effort at all. They just seemed to already be there—alive and waiting for me to let them in.

However, the biggest surprise was the ending of the book. I never planned for it to happen that way. I look back now and have no idea how that came about. I don’t recall making a conscious decision on this at all. 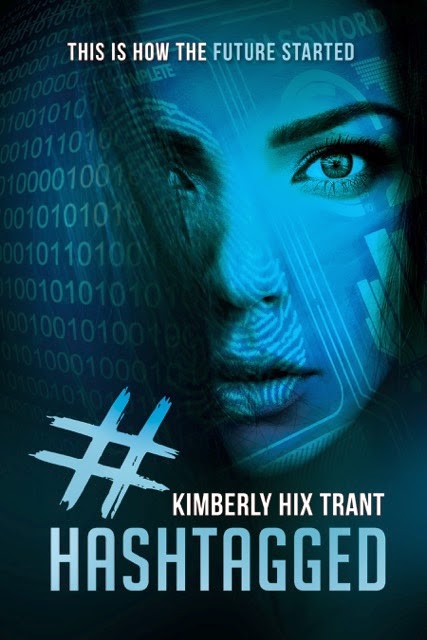 creates a digital footprint filed away for future use. We created technology without boundaries, never considering who, or what, would find a use for these moments that define our humanity.

Maddy Smith’s father has died, leaving her with a mystery box—a puzzle of sorts—that she must solve. To uncover the message her father has left behind, she sets out across the United States to locate her father’s friends, a small group known as the Dinner Club.

As each member of the Dinner Club offers clues and advice, Maddy realizes that her father had been teaching her a specific set of skills.

While traveling, Maddy reunites with Jagger, her occasional lover. Jagger has a connection to her father as well—and his feelings for Maddy are as strong as ever.

In a campground on the outskirts of Roswell, New Mexico, Maddy Smith will discover her destiny—and encounter a totalitarian future only she can prevent. Meanwhile, humanity continues to build a database of human behavior, one hashtag at a time.

Available as a paperback and e-book. It is FREE through Kindle Unlimited for a limited time. http://www.amazon.com/hashtagged-This-how-future-started/dp/1507886837/ref=tmm_pap_title_0

Kimberly Hix Trant is a North Texas technology consultant with a degree in journalism from Texas A&M University. Her first exposure to computers came when her mother, an early champion of technology-based learning, came home with a TRS-80 computer and insisted Trant learn to use it.

Watching her granddaughter reminds Trant that future generations will never know the security and privacy of a life lived offline—and that everything posted online lives on.

Her hobbies include travel, music, books, and movies—all the good things in life.
Posted by Mary Fan at 7:00 AM