BNG FRIDAY: Exploring a Character's Past


For my own contribution to the Brave New Girls anthology, I wrote a little one-off short featuring the titular protagonist from the Jane Colt novels as a teenager. By the time she shows up in Book 1, Artificial Absolutes, Jane is a somewhat jaded recent university grad who dislikes the idea of virtual reality (which is commonplace in the futuristic space opera society she lives in) and dating a young man whose nice-guy ways she finds a bit boring on the surface, but comes to appreciate. 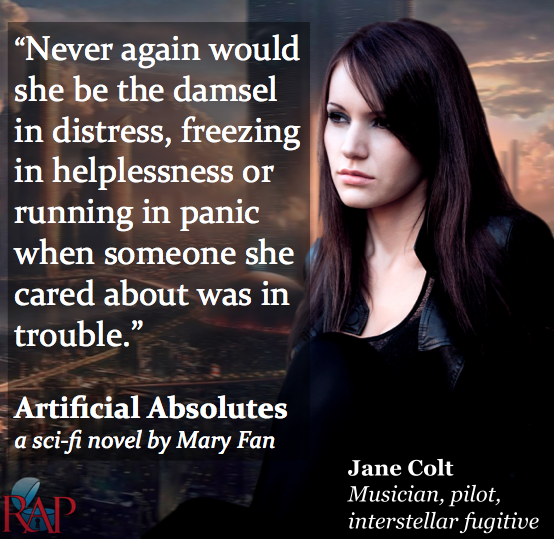 Since my short for BNG would serve as a prequel of sorts, I wanted to shed a little more light on parts of Jane's back story that didn't make it into the novels. In Takes a Hacker, 16-year-old Jane is competing in an interstellar competition for young programmers. When a fellow contestant is falsely accused of breaking tech regulations with her project, Jane's efforts to expose the real culprit leads her into the depths of cyberspace. It's there that Jane's dislike for virtual reality begins.

Takes a Hacker also depicts the kind of guy Jane was accustomed to dating before she met Adam in Artificial Absolutes. Being a pretty girl running around in elite circles, Jane had no shortage of suitors. She just had the terrible habit of picking the ones that checked off certain status symbol criteria – rich, handsome, smooth talkers, etc. – no matter how unappealing she found their actual personalities. The boyfriend depicted inTakes a Hacker is representative of her youthful romantic entanglements. Being a sucker for happy romantic pairings, writing a not-so-happy one was a bit of a departure, but a lot of fun.

While there are a few references that readers of the novels may appreciate, Takes a Hacker is a standalone story. The challenge with writing a standalone short set in a pre-existing world is that I had to resist the temptation to jam all the details. It was a lesson in trimming to include only the immediately relevant information and leave out the rest.

Of course, BNG being an anthology about tech-savvy girls, I also took advantage of the opportunity to let Jane show off her programming skills (which aren't mentioned in the main novels since, by the time they start, she's focused on other things). And to demonstrate how such abilities can come in handy.

The nice thing about writing "bonus" types of stories (like prequel shorts) is that you get to explore elements you had to leave out of the main novels. To finally nurture a few of those darlings you killed in edits. I hope readers will have as much fun reading Takes a Hacker as I did writing it!

BRAVE NEW GIRLS will be released in Summer 2015! Sign up here to receive a notification when it's available to order.
Posted by Mary Fan at 7:30 AM