Today, I'm spotlighting one of the stories that will be featured in Brave New Girls, Courage Is by Evangeline Jennings

A story of teenage angst, friendship, and dataverse hacking set on a far future Civilization Class vessel. When two young loners team up to investigate a minor mystery, they soon discover they're caught in the middle of someone else's game. The stakes could be a matter of life and death. And courage? Well, courage is Gracie under pressure.

WHY WE PICKED IT
Courage Is contains a lot of cool sci-fi concepts that are catnip for an avid fan like me - space travel, virtual reality, and hackers. The combination of cyberpunk and mystery was super entertaining, and Gracie is an intrepid protagonist who uses her knowledge of computers to save the day - a perfect fit for the anthology's theme. The story, which has a darker tone than some of the others we chose, also highlights themes of friendship and, of course, the meaning of courage. 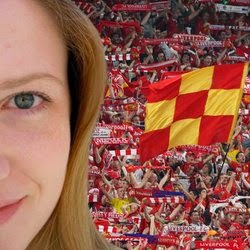 AUTHOR BIO
Born and raised in Liverpool where they invented both football and popular music, Evangeline Jennings now lives in Austin, Texas. The black sheep of her family, she comes from a long line of Californian beauty queens on her mother's side. Evangeline gets her looks from her father. Mostly Evangeline writes stories about girls. Sometimes women. She believes in equality, so she writes about that. She also writes about gender, sexuality, and violence against women. Her characters often seek bloody satisfaction. Many of her stories are not suitable for children but she had a blast writing Courage Is, which is.

THOUGHTS ON BRAVE NEW GIRLS
Evangeline Jennings knows nothing about science and frequently struggles with math. She wants her daughter to grow up in a different world.
Visit her website.
Twitter: @pankhearst and @venalgenie

BRAVE NEW GIRLS will be released in Summer 2015! Sign up here to receive a notification when it's available to order.
Posted by Mary Fan at 9:13 AM