An interview with Shawn Mihalik, author of the novel Brand-Changing Day, recently released by Asymmetrical Press. 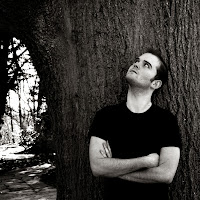 Hi! Welcome to Zigzag Timeline. Can you tell us about your background as an author? What got you into writing?

I’d wanted to be a writer for about as long as I can remember. I took a stab at writing 10-page “novels” when I was like twelve. But I didn’t start writing with the goal of making a career out of it until high school, when I wrote for, and later became the editor of, the school’s newspaper.

I won a small handful of awards for some of my work on the paper, and so I decided that journalism was going to be my focus. I majored in journalism at Youngstown State University, but left after two semesters. My desire to write remained, though, and after a couple years I started writing fiction seriously, leading to the publication of my first book, a novella called The Flute Player, and now of course, Brand-Changing Day

What was the inspiration behind "Brand-Changing Day"?

I’ve worked in a lot of restaurants, but working in restaurants was never what I wanted to be doing at any given point in my life. So when I decided to write my first novel, not only did a book about a fictional restaurant seem the natural choice because I new the setting intimately, but also because it felt like a way for me to adequately express the internal frustrations I’d felt about being stuck in the restaurant industry for so long, something I hadn’t until that point been able to make any non-restaurant-workers understand.

What are you hoping readers get out of reading your book?

I have to admit that on some level I have a desire to be this Sinclairian author, with my book impacting the chain restaurant industry the same way The Jungle did the meatpacking industry. But really, I just want people who read Brand-Changing Day to realize that they needn’t be stuck in any sort of self-repeating cycle with their life, that where they are now doesn’t have to be where they are in the future if they don’t want it to be.

There’s a talking bear in the novel (he’s on the cover actually), and while I won’t reveal too much about him or what exactly his deal is (he’s too important to the plot), I will say that he was a blast to write.

I have two favorite scenes. One is rather early in the novel, and it’s a subtle parody of the orientation videos that are shown to new employees at pretty much any company. The other, and, again, I won’t give too much away here, involves a character having a set of epiphanies about himself and the direction his life is taking, but the epiphanies are realized within the context of Doctor Who, which the character has been recently introduced to by another character.

Drinking. Seriously, though, what is my favorite part of writing one day can easily become the part of the process I hate most the next.

What’s the most challenging aspect of writing, in your opinion?

Similar to my answer above, that’s hard to say. It’s not so much that any part of the process is consistently challenging, but that any and every part can be very hard on any given day. Some days I love writing, and some days I hate it. More often than not I love it, though.

Well, I haven’t written enough books yet to answer that consistently. My novella is only ninety pages and took me five years to get write. Brand-Changing Day is more than twice as long and took me a year. I may or may not be working on something now that will probably be three times as long as Brand-Changing Day and who knows how long it will take me. As for my process, I write every day, except when I don’t.

I’m not one of these writers who think that characters can write themselves or that the author has no real control over what happens in a book. Which isn’t to say that I outline my books, either. But I do plot my books and short stories in my head, and I typically know how it’s going to end way before I get to that ending (in fact, Brand-Changing Day’s final scene was one of the first parts of the book that I wrote). That said, I have surprised myself with how attached I get to some of the characters. There’s a scene in Brand-Changing Day that I knew almost from the beginning was going to happen, but when I finally wrote it, I found myself growing very sad.

What do you think of the indie publishing revolution?

It’s wonderful—I wouldn’t be here without it. And yet at the same time, it’s completely unpredictable. I think some amazing things are going to happen in the publishing industry over the next few years, even more amazing than the things that already have happened. And while I don’t know what they are, I plan to be a part of them.