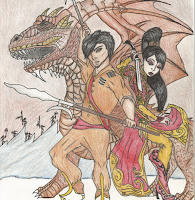 PACE
Dynasty Wars moves along at a good pace. The writing is engaging and efficient, and there's never a dull moment.

CONTENT REVIEW
In the distant future, Earth has become part of a totalitarian empire in which individualism is treated as a disease. Forced to conform, Colonel Kurt Ito Rodriguez spends his days fighting aliens and hiding the fact that he, unlike the hive-like people around him, practices and values independent thought. When a space-time anomaly sends him and a starship full of people back in time to ancient China, Kurt sees a chance to change the past for the better.

Dynasty Wars is a brilliantly imagined tale of military strategy, political maneuvering, and conspiracies set in the later days of the Han dynasty. As the author of two space operas, Butler is no stranger to world-building, and I must say, Dynasty Wars is his most inventive tale yet. Both the bleak future Kurt comes from and the historical fiction element are richly depicted. Butler has clearly done his research with regard to ancient China, and the reader is treated to many fascinating details. Fantastical as the idea of robots and futuristic military leaders in ancient China is, Butler succeeds in making it believable.

Although Kurt is the central figure of Dynasty Wars, Butler tells the story from multiple perspectives. The most fun-to-watch supporting cast member is the beautiful, conniving concubine introduced as Wan, who uses her feminine wiles to pit powerful men against each other. Manipulative, ambitious, and perhaps something of a psychopath (as in lacking empathy), she's not exactly sympathetic, but certainly fun to watch.

Butler has the impressive ability to handle multiple complex story lines and tie them together to serve the themes at the novel's core. Collectivism versus individualism, freedom versus oppression, past versus future... Kurt faces all these and more. He and his crew from the future face challenge after challenge, which they must handle deftly or risk throwing an entire civilization into chaos.

For fans of military-type science fiction, Dynasty Wars offers a unique take on the genre. Well-written and fairly fast paced, its twists and turns will keep you engaged to the very end.

THE NITPICKY STUFF
I received an advance copy of this book, so I can't comment on typos or anything.

This book contains references to sex, but nothing is described graphically.

AUTHOR INFO
James M. Butler has traveled around the world. Part rock musician, part screenwriter (he's had a work optioned by Lion's Gate) and part novelist, James is perfectly at home with the written word.

James has tutored in many subjects, from Psychology to Geography. He prefers history and excels at the subject.

Originally from the swampy hell of south Florida, James has been called many things in his life, and cynical, sarcastic and sardonic are just three of them. He has also lived in various places around the world. Currently, James works as a care giver for the Developmentally Disabled at a group home somewhere in Ohio…
Posted by Mary Fan at 7:52 PM