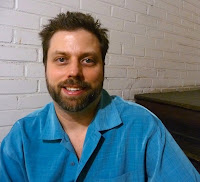 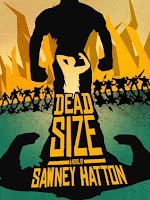 Hi Sawney! Welcome to Zigzag Timeline. Can you tell us about your background as an author? What kinds of books do you write?

I started my professional (i.e., getting paid for it) writing career as a screenwriter, spending several years in Los Angeles penning screenplays that mostly went unproduced. Of the languishing spec scripts I wrote for which I have a particular fondness, such as DEAD SIZE, I intend to adapt these into novels, an effort that seems much more practical and rewarding than just letting them gather cyber dust on my computer.


Like my tastes in film and books, my writing is eclectic. I adore dark comedies, from Evelyn Waugh's THE LOVED ONE to Torsten Krol's CALLISTO, but I also dig horror, fantasy, and thrillers. All of these genres are evident in my debut novel DEAD SIZE. I am most impressed with narratives that court originality, that skew away from the mainstream. While I aim primarily to entertain, I don't want to write stories that are formulaic and forgettable. My work may not be for everyone, but I hope it won't ever be called 'hackneyed'.

Like many writers, I became enamored with storytelling at an early age. I grew up in a very white bread seaside town, where I used my imagination to embellish upon the banalities of suburban existence. Movies like RAIDERS OF THE LOST ARK, POLTERGEIST, and GREMLINS really fed the flames of my nascent creativity. I especially loved monster movies, so I wrote many monster stories. Adventure, action, sci-fi, horror-- all genres that piqued my interest because they made life less boring. I also whiled away the time chewing on rocks.


Dead Size is a dark comedy about a man with a race of miniature people living in his walls. What inspired this story?

I'd love to regale you with some fascinating/amusing/rollicking tale of how DEAD SIZE came to be borne, but I honestly don't remember what inspired me to write it. I suppose I could make something up, but it would probably sound like bullshit anyway.


Okay... how about, I don't get enough sun? Does a vitamin D deficiency make you hallucinate about the Grim Reaper milking Louise Brooks?


Dead Size features a colorful cast of characters, including a punk barista and a cop with memory issues. Among them, who's your favorite?

The majority of the characters in DEAD SIZE are loosely based on real people I have known throughout my life, so I find them all endearing. But if given the thumb-screws to answer, my fave would have to be the main protagonist Gulliver. He is flawed in all the ways I can relate to-- timid, melodramatic, delusional, lewd.


What's your favorite scene from your novel?

Without spoiling anything for those who haven't yet read the book, I'd have to say the final clash between Gulliver and the Micronians. It was definitely the most fun to write.

The conception of a plot (i.e., telling a story) is what enticed me to become a writer. But you can't tell a good story without good descriptions, characterizations, and dialogue. I believe an author must love all the elements that compose a narrative; only then can these pieces come together to make a great whole.


How long does it take you to write a book? Do you have a writing process, or do you wing it?

DEAD SIZE took me four years to finish-- accomplished between my full-time regular jobs and part-time Giant Beaver quests-- which was at least two years longer than I had anticipated. I intend my next novel to be completed well within a year, barring any unforeseen apocalyptic occurrence and my consequent cryostasis which might set me back a few millennia.


As I mentioned previously, I adapted my novel from my screenplay, which really streamlined the process. That said, if there were no script, I'd still outline the story in as much detail as possible before beginning the book. This often helps fix potential plot issues well before you're, say, 2/3 of the way into the novel, forcing you to rewrite god knows how much.


Are you working on anything new?

I just released a mini-collection of shorts on Kindle called WHITE SPACE & OTHER STORIES (http://www.amazon.com/White-Space-Other-Stories-ebook/dp/B00D1V4XVM)


My next novel will be a noir-ish YA novel for adults. It'll be very unlike DEAD SIZE. Which is just how I do things-- different.

Where to find Sawney online:

Dead Size is available on Amazon.
Posted by Mary Fan at 6:25 PM