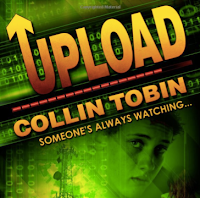 Recommended for fans of suspense novels and technothrillers.

PERSPECTIVE
Third person limited. Upload rotates between the close third perspectives of several characters, primarily the protagonist, Jay, his tech-savvy friend, Bennie, and the mysterious villain, Sturgeon. Each chapter heading states whose POV the chapter will be told from.

CONTENT REVIEW
Teenager Jay Brooks spends his evenings hunting for Wi-Fi hotspots as part of an online operation he runs with his best friend, a wheelchair-bound hacker named Bennie. One night, he stumbles upon a crime in action and downloads a mysterious video transmission. Meanwhile, the villainous Sturgeon runs an illicit operation, harnessing the skills of clueless programmers and an unscrupulous pair of Russian thugs.

Unable to forget what he witnessed, Jay asks Bennie to help him investigate the circumstances of the mysterious video. Their discoveries bring them closer and closer to colliding with Sturgeon’s dangerous business, and what they uncover threatens not only their lives, but all of society.

Upload is a fast-paced thriller with elements of science fiction. The technology behind Sturgeon’s shadowy business is speculative but believable, and the scenes surrounding computer operations are very well described. The plot, the motivations behind it, the way the things work... they all make sense and come together to form a neat, satisfying conclusion. Glimpses of nefarious operations and threats to the main characters keep the suspense high throughout the novel.

Yet at its core, Upload remains a very human story. Jay’s life is in disarray after his mother’s sudden death caused his father to fall into a depression so deep, he scarcely seems to notice Jay. Bennie’s company is his refuge, although the situation is complicated by Jay’s feelings for Bennie’s older sister, Chloe. Both daring and caring, Jay is easy to sympathize with. He displays both a youthful attitude and levelheaded maturity, both intelligence and foolishness.

Bennie is a similarly complex character. He spends his days holed up in his computer lab, living with the painful knowledge that he can never have a normal life. Longing for any kind of human connection, he goes to raves for the sole purpose of crowd surfing and feeling the touch of others. He also displays an admirable kind of internal strength, as he is determined to live his life as he wishes in spite of his disadvantages.

From reading Upload, it’s easy to tell that Tobin is a poet at heart. His prose rings with a symphony of similes, bringing images and emotions to life. Metaphors flow freely through his descriptions, and colorful figures of speech appear regularly. For instance:

“His resistance weakened at night, as if he could no longer uphold the straining pulleys of his sorrow. And they squealed unsympathetically, the ropes slipping through his relaxing hands, lowering the great cold boulder of his mother’s absence on his chest.”

“Suddenly, the rush of the last forty-eight hours came back to him like a magician spewing forth his full deck of cards into the air. But one card remained in his white-gloved hand, stiff with expectant applause. It was the calm, steady, red flash of something else, something he couldn’t yet place.”

The character development and descriptive language seems as though they belong in a more literary genre, and indeed, Upload is far more than another page-turning thriller. It has all the elements of its intended genre—suspense, action, danger… I read the whole thing in one day because I had to know what happened (to the detriment of my sleep schedule). The twists and turns Jay and Bennie run into as they uncover the truth behind Sturgeon’s shadowy operation are cleverly plotted and brilliantly imagined. At the same time, the language brings the story to life in a way that’s rarely seen in modern-day thrillers.

THE NITPICKY STUFF
This book is impeccably edited.

This book contains some adult language and some gun violence.

Collin Tobin lives in Massachusetts with his wife and two daughters. He holds a bachelor's in English and master's in Education. He has worked in the software industry for the past twelve years.

He was the lucky recipient of the Mississippi Literary Festival's 1st place in poetry and has also published poems in "character i" and "The Drum".

When he's not writing, he enjoys re-reading Nabokov's fiction in chronological order, eating very hot salsa, and dreaming up inventions with neither the capital nor the initiative to see them through.

His greatest accomplishment is his wonderful family.

Disclosure: Red Adept Publishing is also the publisher of my own novel, Artificial Absolutes. I bought and read this book on my own, and the above reflects only my honest opinion.