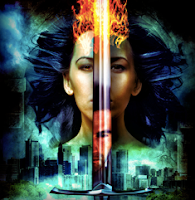 Recommended for fans of urban fantasy and stories about angels and demons, such as the TV show Supernatural.

Oracle of Philadelphia is the first in a series.

PACE
Corrigan sets up the conflict in the very first chapter of the novel. Much of the story consists of fascinating flashbacks and dialogue, and Corrigan’s intriguing characters coupled with a free-flowing writing style keeps the pace up throughout the book. I read the whole thing in a day.

PERSPECTIVE
First person past from the point of view of Carrie, an 8,000-year-old Oracle living in modern day Philadelphia. Carrie spends much of the book telling stories about how she met various angels and demons over the course of her long life.

CONTENT REVIEW
Carrie, who has also been known over the years as Khet, Cassia, Cama, and several other names, is an 8,000-year-old oracle living in modern day Philadlphia. Born in ancient Mesopotamia with the gift to see into the minds of others, including angels and demons, she does her best to keep a low profile. Then one day, a young man named Sebastian, who sold his soul to the archdemon Azrael to save his sister’s life, finds Carrie and asks for help.

Carrie, world-weary after millennia of hearing cases like his, initially gives her standard helpless response. It’s not that she doesn’t want to help; she literally can’t. In the past, she’s tried petitioning angels, demons, and God Himself, but came up empty each time. However, there’s something different about Sebastian. Carrie has the ability to sense another’s aura—their goodness, wickedness, etc.—and Sebastian’s is so bright with goodness that she almost mistakes him for an angel. She’s eventually unable to ignore him any longer and does something she’s never done before: journey to hell in hopes of making her own deal with Azrael.

Oracle of Philadelphia tells the story of Carrie’s life in a series of flashbacks, which are triggered by the entrance of various characters. Over the millennia, she has tangled with many of the twenty or so major angels, several of whom were cast out of Heaven when Lucifer fell and became demons. The most memorable of these supernatural beings is Bedlam, the demon of chaos, who walks the line between good and evil. He’s technically a demon because he, too, was locked out of Heaven, but aside from a tendency to make mischief, he’s actually a decent guy. Energetic, immature, and smart-mouthed, Bedlam is easily the fan favorite, adding a splash of color to the otherwise composed hierarchy of angels.

In Oracle of Philadelphia, Corrigan treats Biblical stories as mythology and re-imagines several to involve her characters. For instance, she tells the story of the Ten Commandments with Bedlam as the doubter who told the people to worship a golden idol (he thought it was a joke and was very sorry when Moses didn’t find it so funny). These re-imaginings are vividly original and captivating to read.

Much of Oracle of Philadelphia consists of dialogue, and both Carrie’s narration and the other characters’ words spring to life. It’s easy to hear their voices as though you’re in the room with them, listening in on their conversations. At the same time, Corrigan has a real knack for description. Whether it’s a tavern in ancient Rome, a museum in modern day Philadelphia, or Hell itself, all the locations are presented vibrantly on the page with just enough detail to let you know where you are.

Carrie is an easily likable main character. Although immortal and capable of reading minds, she is still human at heart. Imbued with quiet strength, her determination and inherent kindness are nothing short of admirable. In many ways, she’s the opposite of Bedlam, who’s been her best friend since she met him in ancient Egypt. Bedlam’s flashy personality is in stark contrast to her low-key existence, and he brings excitement to her life. She finds comfort in his chaotic aura, the hyperactive thoughts perpetually buzzing through his head.

In addition to Bedlam, Oracle of Philadelphia boasts a memorable assortment of characters. Carrie ends up meeting a number of angels and all of the archdemons, each of whom is depicted with his or her own unique, somewhat theatrical personality. There’s Gabriel, the beautiful angel of joy who spends his time as a do-gooder on Earth. And Michael, the stern and unforgiving general who considers himself guardian of Heaven. And Lilith, the Amazonian archdemon. And those are just the ones I can list off the top of my head.

Entertaining and brilliantly imagined, Oracle of Philadelphia is a must-read for fans of contemporary fantasy, especially those who love tales of angels and demons. Corrigan clearly knows every aspect of her world—angel hierarchies, the mechanics of Hell, supernatural politics—and Oracle of Philadelphia offers a tantalizing glimpse of what lies beyond this earth.

THE NITPICKY STUFF
This book is impeccably edited.

This book contains some violence.

ABOUT THE AUTHOR
[from the author's Amazon page]
Elizabeth Corrigan has degrees in English and psychology and has spent several years working as a data analyst in various branches of the healthcare industry. When she's not hard at work on her next novel, Elizabeth enjoys singing, reading teen vampire novels, and making Sims of her characters. She drinks more Diet Coke than is probably optimal for the human body and is pathologically afraid of bees. She lives in Maryland with two cats and a purple Smart Car.

Disclosure: Red Adept Publishing is also the publisher of my own novel, Artificial Absolutes. I bought and read this book on my own, and the above reflects only my honest opinion.