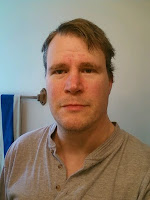 New Dawn: Deception takes place in a dangerous and mysterious universe. How would you describe the New Dawn galaxy in a nutshell to someone who hasn’t read the book?

This galaxy isn’t like most fictional galaxies out there. It’s a dark place, run by criminal organizations posing as governments. Since they’re the law and make the law, pretty much anything goes and they can slip a veil of justice across it at will, just to keep up appearances. Individual people make true justice as they go and try to stay out of the way of their local syndicate. I see it as an allegory for life today with my often times sarcastic, cynical nature.


Why did you choose to write New Dawn: Deception as a series of several seemingly disjointed tales that take place in different corners of the same galaxy?


For the reader’s perspective and my own writing style, mainly. I’m a huge fan of Harry Turtledove, and his best works in my opinion involve a couple of dozen characters set across his universe. I also think it’s important that the reader see multiple sides of the same conflict, to better “flesh it out” so to speak. Sometimes, it’s the ordinary guy or gal in a seemingly ordinary place who makes for a grand story, especially when you combine it with other, similar but different stories.


Of the different characters and scenarios featured in your book, do you have a favorite story arc?


Many of the characters are dear to me. Kiv for his darkness and hostility toward everyone. Maryse for her choices. Kyle for his ingenuity in a crisis. But Tak Vedis is probably the closest character to me. I invented him in another universe of fan fiction and took him with me into this universe. He actually has an original novel all his own, called Sentience: Sensations, set a little while before New Dawn: Deception. He might qualify as my favorite; he and the sentient bots he trails.


What inspired you to write New Dawn: Deception? What was the first idea you had for the novel?


The first idea I had for Deception was the galaxy shattering potential of the alien species. I’m a Christian, and often find myself in debate with those who believe in evolution. I thought, what if I combined the worst of both: religious and scientific fanatics? In the second part of the New Dawn series, you will really see that idea take off. As to what inspired me? This is a universe a co-writing partner (who is also a dear friend) and I created many years ago. She’s writing other things at the moment, but we’re hopeful to write together again someday. She gave me the go ahead to do this myself and I ran with it.


If you were a character in the New Dawn galaxy, who would you be? A pirate? An athlete? A starship commander?


Well, that’s the thing about writing… you end up putting bits of yourself and the people you know into your characters. As I see myself, I’m part of several of my characters, including the rock musician (I’ve been one) Rumos, Gianny (I really was good at football), but I probably have the most in common with Tak, the tragic, unwilling hero, lol.


New Dawn: Deception features more villains than heroes. Did you choose to focus on the bad guys, or did the story just come out that way?


It’s a matter of perspective, really. This is a galaxy where everyone has grown up under the heel of gangsters operating freely, doing as they please. People have learned the hard way that no one will help them but themselves. They’ve also learned that others will do whatever they please and get away with it. Justice is taken by the individual, as they see it, not handed out by a kind, benevolent government. It’s become necessary to be more aggressive in fending for yourself.


What can you tell us about your writing method? Do you outline or just write by the seat of your pants? Any favorite locations? Songs you have playing in the background?


I like to write in a dark, quiet place, very soon after I wake up. That way, there are no distractions, and any dreams I may have had while asleep are still somewhat fresh in my mind. When writing, first, I go to my regular job, and when I can, I think about what I want to do, what characters I want to have. After I’ve taken a lot of free form notes, and combined events and character traits together, then I like to organize everything into what I call a Time Line of chapters. I summarize what each character will do. After that, I get to the writing, usually following closely to my time line, but occasionally diverging when the character leads me somewhere I didn’t expect to go.


New Dawn: Deception is the first in a series. What can you tell us about the rest of the series? How many books will there be? Will new heroes or villains pop up? What will carry over from the first book?


The New Dawn series will end with the second book, Revelation, coming out in a few months. All of the characters in Deception will find resolution in Revelation. Some of the characters, like Tak, Kyle and Dauphine, will live on beyond the New Dawn series. Others, however, are not quite so lucky. However, the New Dawn series won’t be the end of the universe, not by a long shot. I already have other ideas for future books swimming around in my head. However, in the short term, I have a fantasy novel in a new universe, and an alternate history staring me in the face (not to mention an alternate history based on ancient Chinese history to edit). Once I finish those, I shall return to this universe.