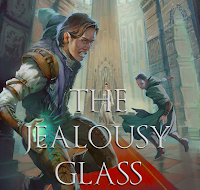 Recommended for fans of medieval and sword-and-sorcery type fantasies.

The Jealousy Glass takes place in a medieval-style world of magic and noblemen, reminiscent of the Game of Thrones series. Like its prequel, The Universal Mirror, The Jealousy Glass focuses on a small group of people maneuvering around the political ins and outs of the Empire of Anjdur. The magic in this novel is understated, and most of the story focuses on empire’s politics—the new ruler, the people loyal to the old ruler, the empire’s relationship with the island of Cercia, etc. As such, it reads more like historical fiction.

The Jealousy Glass is the second book in the Artifacts of Empire series. It can be read without reading the first book, as the story, while dealing with the fallout from The Universal Mirror, is divorced from the main plot of the first book, and Perkins does an excellent job of filling in the necessary details. Quentin, one of the main characters in the first book, is largely absent, and the story focuses instead on Asahel and Felix, who had a supporting role in The Universal Mirror. The Jealousy Glass ends on a cliffhanger.

PACE
In The Jealousy Glass, Perkins takes her time to set up her world and develop her characters. It’s not exactly a plot-driven page-turner, but it’s certainly engaging. There’s a fair amount of tension in the second half of the book, involving personal mysteries and political intrigue.

PERSPECTIVE
Third person. Most of this book reads like third person limited, and there are a few moments that seem to take a more omniscient perspective. This book rotates between the perspectives of the main characters.

CONTENT REVIEW
The island of Cercia has recently undergone a regime change and can’t afford enemies at present. Thus, the new leader, Quentin, sends his good friend, a common-born man named Asahel, and his not-so-good friend, a former noble named Felix, to broker an official truce with the powerful Empire of Anjdur. Shipwrecked near the empire’s shore, Asahel and Felix make their way toward the capital, Aulis, to meet with Empress Irena, who rose to power after defeating her sister, Sophia. After arriving at Aulis, they find that the empire is not as stable as it seems, as many are still loyal to Sophia, and Irena will do anything to hold on to her throne.

The Jealousy Glass reads more like a medieval political drama than a traditional fantasy. Asahel and Felix find themselves dealing with a situation they don’t entirely understand. Not only is the history of Anjdur somewhat opaque, but they are uncertain as to Quentin’s motivations. Why send a commoner like Asahel as an ambassador? And why pair him with Felix, who has plenty of reasons to resent Quentin after Quentin threw him under the bus during the revolution and then stripped him of his lands and titles?

These questions—and Felix’s refusal to divulge much personal information—create a lot of tension between the two main characters, whose personalities are as different as night and day. Asahel is the epitome of goodness—kind, loyal, and simple in the best possible way. He seems incapable of the kind of scheming that surrounds him. Felix, on the other hand, is perfectly willing to scheme. Glib and witty, he is a highly entertaining character to watch. Much of The Jealousy Glass is dedicated to the interactions between these two, developing each one and exploring their relationship.

During their trip to Aulis, they pick up a third Cercian, a cleric by the name of Nicolas. The concept of a Cercian cleric is an interesting one, as the Cercians are staunchly atheist. They believe in the Nietzschean idea that with no worshippers, the gods must be dead. The citizens of Anjdur, on the other hand, are very religious. Sophia was believed to be the voice of their God, and thus the loyalists believe Irena’s ascent to be nothing short of blasphemy. One of the most fascinating elements of The Jealousy Glass is the interaction between Nicolas, whose role as a cleric is mostly to be a counselor and advisor, and the Anjdur citizens who see his atheism as heresy.

The magical aspect in The Jealousy Glass is understated and largely in the background. Cercia was formerly the island of magicians—practically a prison for them, as attempting to leave was punishable by death. There is not much magic in Anjdur, and so the citizens are astounded by Nicolas’ simple card tricks, which seem absurdly simple to Asahel and Quentin, both of whom wield real magic. Magic is chiefly used as a bargaining chip in the truce negotiations, as it is the one thing the tiny island has to offer the mighty empire.

Perkins writes with a distinct and almost archaic voice, transporting the reader back in time to a more mystical era. The old-fashioned lilt serves the story well, adding another layer to Perkins’ immersive world. While the universe her story takes place in is a fascinating place, it’s really the characters who take the spotlight. Through dialogues and internal thoughts, what’s said and not said, they come alive on the page.

THE NITPICKY STUFF
I received an advance copy of this novel, which has since been edited, so I can’t comment on typos and the like.

This novel contains some scenes with medieval-style violence, which are pretty mild. There are no sex scenes and no adult language.

AUTHOR INFO
Gwen Perkins is a museum curator with a MA in Military History from Norwich University. She has written for a number of magazines, exhibitions and nonfiction publications. Her interest in history fueled the creation of the world of The Universal Mirror, inspired in part by people and events of the medieval and Renaissance periods.

An Interview with Gwen Perkins

A Character Interview with Felix