TITLE: For Love and Vengeance 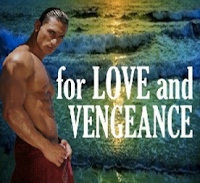 For Love and Vengeance is primarily a thriller, following Royce Cianni around the world as he uncovers nefarious secrets of international spy rings. But his motivations are purely romantic; after one night of passion with the mysterious and beautiful Victoria, he sets out on a quest to learn the truth behind her disappearance. The scenes right after the two meet are straight out of a romance novel, involving walks on the beach and a wine tasting.

PACE
For Love and Vengeance takes its time to set up the backgrounds of and relationship between Royce and Victoria, and the lays out Royce’s investigative process. The book takes off around the second half, when the shadowy organizations involved make their moves.

PERSPECTIVE
Third person limited—the book rotates points of view between characters. Although the book opens with Victoria’s perspective, it is primarily Royce’s story. We are given glimpses into the behind-the-scenes meetings between secretive agencies, creating a sense of dramatic irony as we know what they’re up to even when Royce doesn’t.

CONTENT REVIEW
For Love and Vengeance opens with Victoria, a double agent for both the United States and Russia, contemplating her situation. Trapped between two nations and manipulated by an international crime syndicate, she seeks a way to escape her dangerous life. As she walks along the Florida beach, she meets Royce, a handsome ex-spy haunted by the death of his girlfriend, who was killed due to one of his past missions.

After one evening of romance and passion, Victoria vanishes, presumed to have been killed in a shark attack. But Royce is unwilling to accept her loss so easily. Driven both by an infatuation with her and guilt over his past inability to save a woman he loved, he sets off in search of the truth behind her disappearance—and whether she is even dead. His journey takes him around the world as, bit by bit, he uncovers her intriguing past. Meanwhile, both the American and Russians spy organizations keep a watchful eye on him as they, too, hunt for Victoria.

In For Love and Vengeance, Ray has created an appealing blend of thriller and romance. The book is first and foremost a thriller, involving shadowy organizations and nefarious characters. And yet the scenes between Royce and Victoria are purely romance, containing all the staples of the genre: mutual attraction at first sight, flirty conversation, passion. The setting Ray chooses—a balmy Florida beach—makes for great escapist reading. Like Victoria, in those moments, it’s easy to forget about the spies and the crime syndicate and all those dark elements when the story zeros in on two people who seem destined for one another.

Both characters are instantly likable. Victoria comes across as a strong character, a woman who is intelligent and able and ready to take enormous risks to get her life back. While she does, to some extent, use Royce as a cover as she plans her escape, she does truly care about him. Royce is down-to-earth and charming, fully dedicated to whatever it is he sets his mind to.

As suddenly as she appeared, Victoria disappears from Royce’s life. While Victoria dominates the first few chapters of the book, it is primarily Royce’s story. His efforts to track her down are nothing less than obsessive, as, for all intents and purposes, she might as well be dead. Herein lies the thriller element of Ray’s novel, the part that keeps the pages turning. As an ex-spy, Royce is no stranger to the shadowy world of spy organizations, and he unleashes the full force of his investigative skills to discover the truth about a woman he barely knew and yet instantly fell for. The more he learns, the more he realizes just how much he and Victoria have in common. Both are good people working for not-so-good organizations, organizations more than willing to screw them over to get what they want.

It’s not much of a spoiler to say that Victoria is, in fact, alive, and that she faked her death to get away from those who were controlling and threatening her. Once she returns, the story accelerates in a way that makes this a hard book to put down. For Love and Vengeance is a shamelessly entertaining guilty pleasure, the kind of book one reads to escape the doldrums of everyday life and delve into a world of intrigue and passion. Between the suspense and the romance, Ray has created a very entertaining story, one that keeps you guessing.

THE NITPICKY STUFF
There are a handful of small typos, but nothing too distracting.

Some parts of the dialogue are written in Russian with translations in parentheses.

In terms of sex and violence—they’re present but not graphic.

AUTHOR INFO
Johnny Ray is a full time writer who loves to write on the beaches of western Florida. While addicted to coffee in the morning, he enjoys his friends and wine at night.
He won the Royal Palm literary award for best thriller and is quickly making a name for himself as the master of the romantic thriller.

RELATED: An Interview with Johnny Ray
Posted by Mary Fan at 6:44 PM