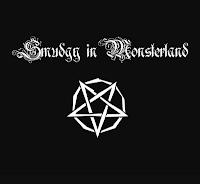 Recommended for fans of twisted fantasies and demonic horror.

Smudgy in Monsterland is a twisted tale that takes place about a thousand years in the future, in which Nazis won World War II and subsequently conquered the Earth and its interplanetary settlements. The title refers to a cartoon series that became a cultural phenomenon and inspired the theme park in which the story takes place. Although it opens like a science fiction novel, it soon spirals into the domain of the supernatural, introducing Satanic cults, demons, and witchcraft. Death and mutilation occur with relative frequency and are treated offhandedly, with the bloody scenes described but not in excessive detail.

PACE
This book is mostly fast-paced. A few chapters in the opening take the time to set the scene, and there are lulls in which time passes, but the majority of the book barrels forward at a pace that kept me flipping the pages. By the time I got to the second half, I couldn’t stop and finished the book in one session.

PERSPECTIVE
The majority of the book is written in third person limited, describing the experiences and thoughts of the main character, a 12-year-old boy named Odo. One chapter near the beginning is the first person account of a Satanic terrorist, and there are a handful of chapters focusing on another Satanic cult member, Gretel, written from third person limited.

CONTENT REVIEW
12-year-old Odo Kreppler is the sole survivor of a terrorist attack on the space habitat on which he lives. The space habitat serves as an enormous amusement park dedicated to the cartoon series “Smudgy in Monsterland,” a cultural phenomenon that has run for centuries. Odo’s sole comfort in his newly orphaned state is his plush Smudgy toy, a white rabbit missing an ear.

Sent to an orphanage near the Monsterland park, Odo finds himself bullied by the other boys, who have formed gangs united under the mutual goal of defeating the corrupt nuns who serve as their guardians. After a particularly cruel boy destroys the Smudgy toy, Odo is greeted by a real life talking rabbit claiming to be Smudgy’s brother, Sludgy. Confused, traumatized, and tormented, Odo is blind to the absurdity of the situation and unquestioningly does Sludgy’s bidding in hopes of not only getting revenge on the bullies, but gaining immortality.

Throughout the book, Odo is driven chiefly by his paralyzing fear of death. For a chance at eternal life, he is willing to compromise his morals and even his very soul. Many of his actions, when reflected upon after the fact, are nothing short of despicable. And yet when caught up in his story, one cannot help sympathizing with this tortured young boy, whose sanity is questionable. He acts out of desperation, not malice. The eventual destruction of his innocence, with its glimpses of hope and pits of despair, is both horrifying and fascinating to watch.

The world Rasche creates in Smudgy in Monsterland is truly unique. The title could refer to the cartoon that so influences Odo, or it could refer to Odo himself. The premise of the cartoon is that Smudgy, a noble rabbit, is trapped in a world of fantastical and wicked creatures, a twisted version of Lewis Carroll’s Wonderland. Like Alice, Odo is torn into an unfriendly and unfamiliar world, but instead of delightful nonsense, he faces the very worst of both humanity and the supernatural. Rasche shares Carroll’s flair for the bizarre. The orphanage is located next to the amusement park’s largest rollercoaster, and thus serious moments are interrupted by the screams of tourists. The orphans assign each other random gang names, such as Blue Folder and Recommended Method, based on the first words heard from a television channel. Personalities are exaggerated—such as the large oaf Jep, whom Odo bribes with cakes into doing his dirty work, and the drunken nuns. And then there’s Sludgy, the little black bunny rabbit who serves as Odo’s personal Mephistopheles.

All this rests against the backdrop of a twisted regime, in which the cartoon Smudgy has become next to holy, Nazi officers chop off their ears in reverence to the character, and those convicted as witches are burned alive annually. Smudgy in Monsterland is the kind of book more focused on its universe than its characters, as people other than Odo and Sludgy are left as vague sketches, background humming to the main conversation. While some are memorable, such as Lambchop, the bully who destroyed the Smudgy toy, and Suki, the pretty teenage girl who helps Odo and serves as his only friend, most are merely functional.

Smudgy in Monsterland can only be accurately described as “indefinable.” Part dystopian sci-fi, part demonic horror, intertwined with a maniacal sense of humor. The surrounding madness is both disturbing and mesmerizing, and the atmosphere of the book is one that left me thinking both “what the hell is this?” and “I can’t stop reading...”

THE NITPICKY STUFF
There are a handful of small errors that are barely perceptible when one is caught up in the story.

Some readers may find the Satanic themes and gruesome violence disturbing. Although the protagonist is a young boy, this is not a children’s book.

AUTHOR INFO
Paul Rasche lives in Melbourne, Australia. He is a cartoonist and designer as well as a writer. Contact him by email or Find him on Google+.

RELATED: An Interview with Paul Rasche
Posted by Mary Fan at 8:52 PM