This interview was originally conducted in August. Non-Compliance: The Sector has since been edited and re-released by Kristell Ink.

Paige Daniels, author of the cyberpunk novel Non-Compliance: The Sector, answers questions about her novel's characters and inspirations. Visit her blog or Follow her on Twitter 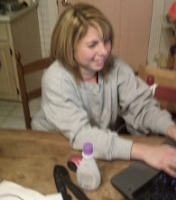 What served as the inspiration for the invasive government technology central to Non-Compliance?

The inspiration for the invasive government technology or GovTek came from some conspiracy theories I’ve read about the Mark of the Beast. The Mark of the Beast comes from the Bible and basically anyone who accepts it, is marked by the devil. Some modern day conspiracies for this say that this mark will come in the form of a chip. Others insist that flu vaccines have been spiked with microscopic forms of these tracking chips and many of us have already been marked.

One of the most memorable aspects of Non-Compliance is Shea’s tough-and-nerdy personality. How did you go about developing her character?

Really it was born out of frustration with characters in various types of media. There aren’t many women characters that I can identify with. There are plenty of tough-as-nails women and there are plenty of women who are smart; however, it is rare that you find a main character who is both. Usually, the smart women in books or movies are relegated to the quirky sidekick or they are super serious. I wanted a fun smart character. I wanted someone that was smart and could kick butt like MacGyver. It was also important that she wasn’t super human tough, because that wouldn’t be believable to me. That is why there are many incidents where Shea gets her butt kicked too.

What can you tell us about the gruff and reticent Quinn Knightly, the man whom Shea claims to dislike but has undeniable chemistry with?

It’s funny, because I didn’t think I would end up liking this guy as much as I do. As a matter of fact, many of ladies who have read it have commented that they like Quinn a lot.

Quinn initially comes off as just another surly thug, but we later find out there is more behind his growls than meets the eye. On the surface he and Shea seem like polar opposites, but down deep they are very similar. He cares deeply for his team and the whole NCS. Even though he thinks Shea is a total pain in the ass, he can’t help but genuinely care for her too. Shea is the one person that has gotten Quinn to let his guard down. In the next book we will find out the story behind why Quinn is so guarded and surly.

How did you come up with the names of your characters?

For most of the characters I just thought that a certain character “looked” like the name I gave them. Some of them I just liked the names. For instance, Wynne Myers, Wynne is a former co-worker and I always thought her name was cool so I named a character after her.

However, there were some that had a little more thought behind them. Shea’s first name is really Saoirse (pronounced SEER-she) and she has adopted a shortened version to save herself time from correcting people. The only one who calls her by her full name is her father. Saoirse actually means “freedom” in Gaelic. I thought it was fitting.

Quinn means “wise” or “intelligent” in Gaelic. Quinn is quiet and thoughtful and a lot smarter than people give him credit for.

Boss’s name is Robert Jennings, but everyone calls him Boss. I used Robert as homage to the best front man ever, Robert Plant.

If Non-Compliance were made into a movie, who would you cast?

When I started writing this book I actually started keeping a document where I have a character synopsis of some of the main players with a picture of an actor that I think of when I see this character in my brain.

Shea: It’s probably not what anyone would expect me to say: Katee Sackhoff (Starbuck in Battlestar Galatica). Yes, I know she is blonde but that is what they make hair dye for. Katee has that smart aleck quality I love. She is pretty, but in an approachable kind of way.

Quinn: 100 percent hands down my favorite actor of all time, Adam Baldwin. So, Mr. Baldwin if you are reading this blog right now, give me a call, we’ll talk.

I guess it is all in what you like to write about and can make interesting. For instance, Isaac Asimov is one of my all time favorite writers and there usually isn’t much on character development, but he writes a darn interesting story. I love how he speculates on the technology and how society will ultimately be in a thousand or so years from now. However, I like character driven books too. Like Kim Harrison’s Hallows series. If the characters weren’t so interesting I would’ve stopped reading a long time ago.

I like to dabble in both. In real life I like to watch interactions between people, especially people who are polar opposites. I am a pretty quiet person and when I’m at meetings at work I like to sit back and just take it in. I use a lot of that interaction as material in my book. Especially all the smack talk and lab talk.

In the second book there will be a little more science-y stuff, but I haven’t left out the banter, because that is just as interesting for me to write.

Do you have any tales about funny things that happened while you were writing Non-Compliance? Sudden epiphanies? Strange places you found yourself writing? Unexpected inspirations?

I’ve been formulating ideas for this book since college. I’m thirty-seven, so that is a long time. Finally, in the last several years, after earning my Master’s degree, I decided it was time to do something I wanted to do. So I gathered the courage to write this book. I pretty much wrote after the kids went to bed and in spare pieces of time I could get on the weekends. I always take my iPad with me when taking the kids to gymnastics or where I’ll be waiting in case I get an idea.

I found myself on the website, How Stuff Works, a lot to get better explanations of how some of the technology Shea uses works. I also did research on nano-technology. When I had to take some students to Purdue University for a field trip I made sure that we visited their nano-technology center and I got a lot of inspiration from that. I work in an environment where science “happens” all the time, so I’m lucky to have all kinds of inspiration day to day.

What’s next for Shea Kelly?

Shea and Quinn are going to get together. I don’t much like the will-they-won’t-they scenarios. So there it is: they will get together in book two. I hope you didn’t consider that a spoiler, because I didn’t. However, like any couple, they will have issues they need to work through.

Also, Shea and Quinn will be thrust into more of a leadership role. We’ll see Shea struggling with this because she doesn’t view herself as a leader. Also, we’ll meet some new characters that will have some insight into Shea’s past. Don’t despair. Shea will still be fun and will, of course, kick ass and make cool gadgets.