Hey everyone! I'm thrilled to participate in the cover reveal for Michelle Kan's NO MORE HEROES: HELL OR HIGH WATER! Here it is below! Pretty cool, right? 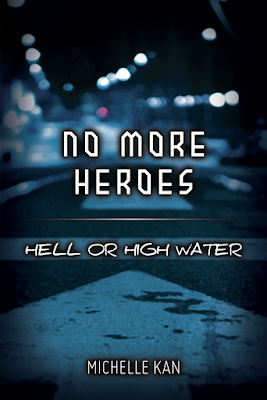 ABOUT THE BOOK
The peaceful nights are kept under the clandestine and watchful eye of young, gifted Vigilantes the world over – and since the Vigilante Killers were taken down six months ago, order has returned to the community once more. Vigilantes everywhere have resumed their usual rhythm, defending their domains within the safety of the shadows, and all is right with the world.

So when an old enemy resurfaces and asks them for their help, the Vigilantes of the City are reluctant, to say the least. But some offers are hard to turn down, and soon Team City find themselves diving headlong into a mystery that will test their limits, their capabilities as Vigilantes, and their relationships with each other.

HELL OR HIGH WATER is an urban fantasy action/adventure novel about young, would-be heroes who find that sometimes camaraderie can come from the least likely of alliances… and strength can be found in the most unexpected of places.

Featuring a diverse cast of players, discord, a mystery to be solved, plenty of literary action and high-stakes battles, NO MORE HEROES is a series about self-belief and camaraderie, persistence in the face of trials, and what it means to be the best version of yourself.

BONUS:
Preorders of NO MORE HEROES: HELL OR HIGH WATER will come with a bonus short story, THE STUFF OF LEGEND, presenting an alternate perspective on the events of Book 2, and a lone Vigilante’s experience with a long-lost Urban Legend of the Vigilante community. 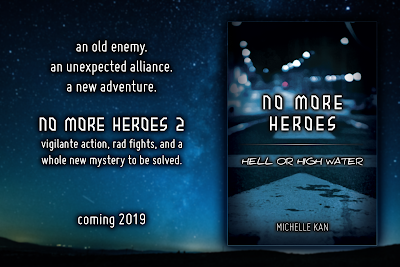 ABOUT THE AUTHOR
Michelle Kan is an independent filmmaker/videographer and writer based in Wellington, New Zealand. Fish & Swallow Productions, her online content production studio, is dedicated to the documenting of arts/cultural events and the spotlighting of artists, creatives and other extraordinary individuals around New Zealand. NO MORE HEROES was her debut novel and was initially written during her first National Novel Writing Month in 2014.

A 1.5 generation Chinese-New Zealander, Michelle is passionate about the arts, exploring her cultural heritage through her creative output, and is a lover of graphic novels, video games, action/martial arts films and parkour – all profound influences which helped her shape the world and characters of No More Heroes.