Today, I'm thrilled to announce that I'll be publishing my YA sci-fi romance, STARSWEPT, with Snowy Wings Publishing! It's been a long and tumultuous journey for this little book, full of joy and despair and laughter and lots and lots and lots and LOTS of tears. I'll spare you the gory details ;-)

Anyway, after all the madness and twists, STARSWEPT is finally nearing the end of its journey. It's coming out this August, and I can't wait to share it with you! 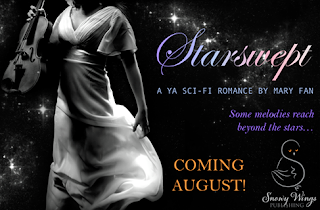 ​A century ago, an advanced race of telepathic humanoids made contact with Earth. Now, fifteen-year-old violist Iris Lei considers herself lucky to live on the high-tech campus of Papilio, a prestigious performing arts school powered by their futuristic technology. Born penniless, Iris’s one shot at a better life is to attract an Adryil patron. But only the best get hired, and competition is fierce.

A sudden encounter with an Adryil boy who breaks into Papilio upends her world. Iris longs to learn about him and his faraway realm, but after the authorities capture him, the only evidence she has of his existence is the mysterious alien device he slipped to her.

When she starts hearing his voice in her head, she wonders if her world of backstabbing artists and pressure for perfection is driving her insane. As her connection to him grows stronger, she discovers that her visions of him are real—by way of telepathy—and soon finds herself lost in the kind of impossible love she depicts in her music.

But even as their bond deepens, Iris realizes that he’s hiding something from her—and it’s dangerous. Her quest for answers leads her past her sheltered world to a strange planet lightyears away, where she uncovers secrets about Earth’s alien allies and the artist trade that shatter everything she knows.

ADD IT ON GOODREADS
Posted by Mary Fan at 11:33 AM