Today, I’m revealing the cover and story line-up for BRAVE NEW GIRLS: STORIES OF GIRLS WHO SCIENCE AND SCHEME, coming August 2017! This YA sci-fi anthology (edited by sci-fi authors Paige Daniels and Mary Fan) features stories about girls in STEM (Science, Technology, Engineering, and Math)… Girls who engineer, tinker, hack, and more, using their smarts to save the day. It’s got space operas, sci-fi mysteries, steampunk, cyberpunk, all kinds of punk! Proceeds from sales of the anthology will be donated to the Society of Women Engineers scholarship fund.


Stories in the anthology (in alphabetical order by title):

The 17th Quadrennial Intergalactic Neo-Cultural Expo and Science Fair by Jeanne Kramer-Smyth
The Adventure of the Brass Lamp by Margaret Curelas
Arch Nemesis by Jamie Krakover
The Babysitting Job: A Robot Repair Girl Adventure by Josh Pritchett
The Case of the Missing Sherlock by Mary Fan
Chasing the Copper Dragon by Karissa Laurel
Circus in the Sky by Lisa Toohey
Dangerous Territory by Holly Schofield
The Experimental Bug – First Test by Jelani-Akin Parham
Hack by Evangeline Jennings
In a Whole New Light by Michelle Leonard
The Last Android by Paige Daniels
Let Androids Eat Cake by Meg Merriet
The Maker’s Handbook by George Ebey
The Non-Existence of Gravity by Steph Bennion
Nova by Stephen Landry
Our Very Respected and Always Benevolent Leader by Kay Dominguez
Scilla’s Monster by Elisha Betts
Skyris by A.A. Jankiewicz
Sweet Emotion by Bryna Butler
The Swiss Cheese Model by Eric Bakutis
The Verne Shot by Brandon Draga

Brave New Girls: Stories of Girls Who Science and Scheme is the second volume of the Brave New Girls anthology series. The first, Brave New Girls: Tales of Girls and Gadgets was released in June 2015 and has so far raised thousands of dollars for the Society of Women Engineers Scholarship fund. Find it on Amazon. 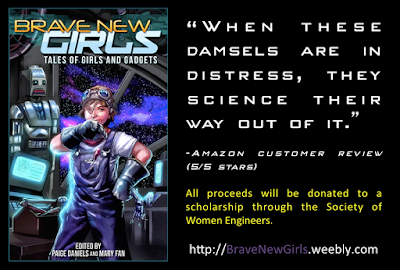 Mary Fan is a hopeless dreamer, whose mind insists on spinning tales of “what if.” As a music major in college, she told those stories through compositions. Now, she tells them through books—a habit she began as soon as she could pick up a pencil. And what stories she has! Currently, she has three series in progress and likes to think that she has even more in her bag. Her books include the Jane Colt trilogy, the Firedragon novellas, and the Fated Stars novellas.