Star Wars is basically my favorite thing ever. Hell, I even marathon the prequels now and then. So of course I got early tickets to see The Force Awakens in theaters. And of course I saw it again three days later. And of course I read every scrap of internet discussion I could dig up, from speculations and fan theories regarding the various questions left open-ended by the end of the movie to thinkpieces about what the new Star Wars' cultural impact.

There's been much celebration about Rey, and rightfully so. Finally, a female Star Wars lead! Much as I love Princess Leia and Padme Amidala (in the first two prequels), they were ultimately side characters. Important side characters, but side characters nonetheless (especially Padme, who gets reduced to a weepy mess who needs her man to tell her what to do in Episode III and dies for no reason after he's mean to her. Ugh). Rey, on the other hand, seems to be poised to be the new trilogy's Luke Skywalker – the hero who goes on the hero's journey and the new chosen one to save the galaxy from evil. So huzzah for Rey! Huzzah for girl power and feminism! 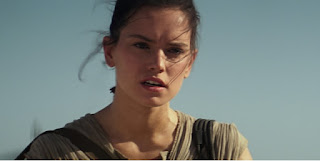 There's just one thing that bothers me though. In all the promo for The Force Awakens, it was implied that Finn might be the next chosen one. He's the one who gets the lightsaber in the posters, and he features just as heavily as Rey (if not more so) in the trailers. Having seen the movie, it's now clear that the filmmakers were throwing us a curveball. Let us believe that Finn is the next Luke and Rey is the next Leia or Han—the important helper character. Though I was a little annoyed that it appeared the girl was once again going to be denied a lightsaber (I remember fiercely wishing that Padme would get one before the latter two prequels came out), I was pretty thrilled at the idea of a POC lead. While we had Lando in the original trilogy and Mace Windu in the prequels, they, like Leia and Padme, were ultimately side/supporting characters. Let's face it: Star Wars—and most sci-fi/fantasy—is pretty damn white. And while there certainly aren't enough heroines on screen yet, I daresay there are more white heroines than POC heroes (either male or female) in popular SFF – Hermione, Katniss, Black Widow, Mystique, Tris, River Tam, Elizabeth Swan, Furiosa… not to mention Princess Leia and Padme Amidala. Wouldn't it be cool if the new Luke Skywalker figure was a POC? 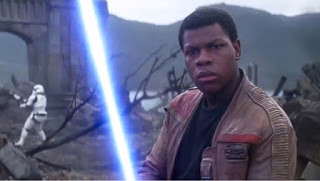 Then the poster was revealed with Rey front and center and Finn, though holding a lightsaber, off to the side. Early reports about the movie came out that the character with the most screen time was Rey, followed by BB-8 and Han Solo, followed by Kylo Ren and Finn. Wait… Finn comes after BB-8?!

While Finn undoubtedly has a central part to The Force Awakens, he's kind of the new Han figure – the important helper. Which is still awesome, and I loved his role in the film. But there's been a lot less Internet celebration about him – probably because he's a him. People are gushing about how Rey is changing the world and breaking boundaries, and yes, she is. But you know what? So is Finn.
And you know what would be even more revolutionary? A WOC as a central character. Hey, there are still two more Star Wars movies (main ones, not spinoffs) in the making. Maybe the next Lando – the character who shows up halfway through the trilogy but makes a huge splash – will be both female and non-white. Which would be a long time coming, because dammit, there are NO WOMEN OF COLOR AS ACTUAL CHARACTERS IN THE OTHER SEVEN FILMS. They only exist as background extras (though at least they exist at all). And before you say "Maz Kanata" – she's an alien. Lupita Nyong'o voices her, yes, but she's hidden behind an orange CGI critter.

Back to Star Wars. Hooray for Rey, our (white) female central character! Hooray for Finn, our (male) POC important helper character! Now, can we get some WOC in here?
Posted by Mary Fan at 10:52 AM