Interview with Andrew Joyce, author of Molly Lee, currently on sale for 99 cents through Monday, September 21. 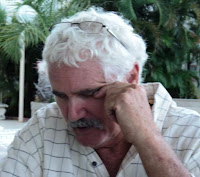 My first book was a 125,000-word historical novel. And in the publishing world, anything over 80,000 words for a first-time author is heresy. Or so I was told time and time again when I approached an agent for representation. After two years of research and writing and a year of trying to secure the services of an agent, I got angry. To be told that my efforts were meaningless was somewhat demoralizing to say the least. Those rejections were coming from people who had never even read my book. 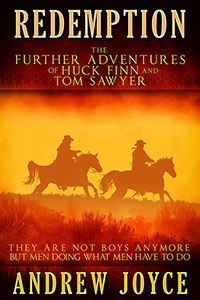 So I sat down at my computer and banged out REDEMPTION: The Further Adventures of Huck Finn and Tom Sawyer in two months. (I had them as adults in the Old West.) Then I sent out query letters to literary agents.

Less than a month later, the chairman of one of the biggest agencies in New York City emailed me telling me that he loved the story and suggested a few changes. They were good suggestions, and I incorporated about 80% of them into the book. We signed a contract and it was off to the races, or so I thought. But then the real fun began: the serious editing. Seven months later, I gave birth to Huck and Tom as adults. And just for the record, the final word count is 79,914.

One morning I went crazy. I got out of bed, went downstairs, and threw my TV out the window. Then I sat down at the computer and wrote my first short story. It was soon published in a print magazine (remember them?). I’ve been writing ever since.

I had just finished reading Mark Twain’s Huckleberry Finn for the third time, and I started thinking about what ever happened to those boys, Tom and Huck. They must have grown up, but then what?

This is like asking a parent which of their children they love the most. Let me just say that I have a strong attachment to Huck Finn and Molly Lee.

It would be easier if I just shared the scene with you.

That was the pinch in the game for me. With a quick look to Tom, I stepped out of the barn. Now, I’ve always been a fair to middling shot with a long gun. And Pap always said there was a devil in us Finns. He said we had an Irish temper that couldn’t be tamed, but I always thought that was a lot of hogwash. However, on that gray morning, I knew without thinking about it that if I pointed that Colt Dragoon at a man, he’d be dead long before he hit the ground.

I stood just outside the barn door, legs spread. The sergeant was so intent on dragging Molly, he didn’t see me. The two privates had their attention in the opposite direction, watching the Lee family. Then I saw Will make a run for the sergeant. The private standing with the family raised his gun and took aim, but he did not fire despite the order to shoot. When the sergeant and Molly got to within a hundred feet of me, and before Will caught up to them, I yelled with hatred in my voice, “Let her be, you pig!”

I didn’t wait for him to answer or to set Molly free; I raised the Colt and shot him right through the heart. Without hesitating, I pulled back the hammer and squeezed the trigger again, shooting the one on the horse in the forehead. He fell off with a thud as he hit the ground. By that time the other one, the one who had sighted Will but did not shoot, had dropped his gun and had his hands in the air. I walked up to him and said, “Give me one good reason why I shouldn’t kill you this very minute.” He was shaking from head to foot and didn’t say anything. When I got closer to him, I could see that he couldn’t have been much more than sixteen. It took everything in me not to pull the hammer back and squeeze the trigger a third time. Instead, I clubbed him behind his left ear, and he kissed the dirt.

I reckon I’d have to say that writing dialogue is my favorite part of the writing process.

The way I write is that I have the first sentence and the last paragraph in my head before I start a book. Then all I have to do is come up with 100,000 words to fill in the blank space. That’s the easy part.

I don’t write all day long, maybe four hours a day. And when you take into account the editing, it takes me about seven months to produce a finished book.

I really don’t know. But I do write in all genres. I have 140 short stories that cover everything from the detective genre to science fiction and everything in between.

John Steinbeck. Listen to this:

"The afternoon came down as imperceptibly as age comes to a happy man. A little gold entered into the sunlight. The bay became bluer and dimpled with shore-wind ripples. Those lonely fishermen who believe that the fish bite at high tide left their rocks and their places were taken by others, who were convinced that the fish bite at low tide."— John Steinbeck, Tortilla Flat

Have ever read anything as beautiful? Especially the first sentence.

I usually have the next day’s writing in my head by the time I go to bed. When I wake up the next morning and go to work, I start to take my characters where I had intended. But sometimes, they’ll decide they want to go in another direction and that’s where we’ll end up. I’m cool with that. After all, it’s their lives.

Thank you for having me.

From the author of the best-selling novel, REDEMPTION: The Further Adventures of Huck Finn and Tom Sawyer comes MOLLY LEE. Molly is about to set off on the adventure of a lifetime . . . of two lifetimes. It’s 1861 and the Civil War has just started. Molly is an eighteen-year-old girl living on her family’s farm in Virginia when two deserters from the Southern Cause enter her life. One of them—a twenty-four-year-old Huck Finn—ends up saving her virtue, if not her life. Molly is so enamored with Huck, she wants to run away with him. But Huck has other plans and is gone the next morning before she awakens. Thus starts a sequence of events that leads Molly into adventure after adventure; most of them not so nice. We follow the travails of Molly Lee, starting when she is eighteen and ending when she is fifty-six. Even then Life has one more surprise in store for her.

Find it on Amazon
ABOUT ANDREW JOYCE

Andrew Joyce left high school at seventeen to hitchhike throughout the US, Canada and Mexico. He wouldn't return from his journey until decades later when he decided to become a writer. Joyce has written three books, and a collection of almost one hundred forty short stories that is comprised of his hitching adventures called BEDTIME STORIES FOR GROWN-UPS. He lives on a boat in Fort Lauderdale, Florida with his dog, Danny. MOLLY LEE is a followup novel to the best-selling REDEMPTION: The Further Adventures of Huck Finn and Tom Sawyer.