From the Mixed-Up Genres of Mrs. Ama Z. On

First of all, if you got the reference in the title of the is post, then *high five*. It's a play on From the Mixed-Up Files of Mrs. Basil E. Frankweiler, a book I read as a kid and that has stayed with me ever since (and that may be part of the reason behind my obsession with the Met Museum).

Anyway, it looks like the Mighty 'Zon, also known as Amazon.com, has decided to take my book's spooks more seriously than I do... Look what they categorized FIREDRAGON RISING as!


That's right--HORROR. Probably because the story has monsters and ghosts? But not all monsters and ghosts are created equal. While Aurelia winds up in plenty of danger, FIREDRAGON RISING is, at its heart, a fantasy adventure, full of scary beasties and dark magic. Which is quite different from horror stories intended to, as the genre implies, evoke a sense of horror. The novella is meant to take you on a thrill ride, like a rollercoaster, not freak you out, like a haunted house.


But ah well. What's in a genre anyway? The lines are always changing, always blurring. And the Flynn Nightsider universe, where FIREDRAGON RISING and its prequel, THE FIREDRAGON, reside, is quite the mash-up. It has magic at its core, which makes it fantasy. It's also chock-full of supernatural spooks, like monsters and ghosts, which does encroach on horror-land (at least paranormal, which is a subset of horror). Yet it takes place in the future and is all about toppling a totalitarian government, which makes it dystopia... a kind of sci-fi. So it's got pieces of sci-fi and fantasy and horror.


So maybe Amazon's not so mixed-up after all. Especially when I remembered that I wrote this bit in Chapter 6: Darkness Closing...

Suddenly a chill—icier, even, than the winter wind—wafted through the air, and she stopped abruptly. Something dangerous was coming, and the slight tremor in the ground beneath her confirmed it. Another freezing gust blasted toward her, causing the trees to shake and their bare branches to rattle. Beneath the gale, she heard a woman’s faint voice calling, “Hellooooo, little giiiiirl...”
A specter. Its voice seemed to have come from all directions at once. Shuddering, Aurelia seized her swords and held them out to her sides, swinging them quickly in hopes that the silver blades would force the spirit to back off. There wasn’t anything else she could do to fight a spirit. Fear pricked at her, but she swatted it away. Specters fed on fear, drawing strength from its energy. She wouldn’t give it that advantage.
“Helloooooo,” the specter said again, and this time its tone carried a cruel laugh.
Aurelia looked around wildly, searching the dark and hoping she wouldn’t find anything. The more visible a specter was, the more power it wielded, which meant the weakest were as transparent as the wind while the most powerful looked almost solid. As long as this specter wasn’t strong enough to materialize, she stood a chance of escaping before it hurled her into a tree, or heaved a boulder at her head, or found some other way to kill her. Dread clawed at her insides, and she fought to keep it down.
Then an abrupt, resounding crack shot through the night, and she sensed something huge coming at her. Realizing it was a falling tree, she leaped out of the way just before the trunk crashed into the ground. The snapping of branches peppered the air like gunfire, and she ducked as one came barreling toward her.
As she sprang back up, her eyes caught a horrifying sight: A faintly glowing, translucent woman in a blue dress that hung in tatters from her skeletal figure, which was loosely covered in torn, gray skin. Her face was so distorted that Aurelia wondered how it had ever been human at all. One eye looked as if someone had grabbed it and its surrounding flesh, yanked it down next to the nostrils, and then filled the resulting space with an enormous gray boil. The lips appeared to have crumbled away, leaving a ragged hole around the eternal grin of a skull’s teeth.

Okay, so that's pretty horror-y, right? But does that make FIREDRAGON RISING actual horror? Let me know what you think when you're done reading it (*hint hint* *angelic smile*)... and oh, look! Here it is on Amazon! What a handy link... 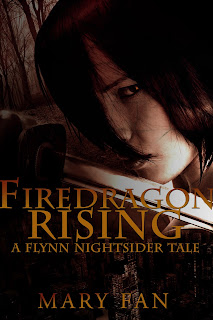 Sinister plots. An underground rebellion. And a treacherous road filled with monsters and enemies unknown.It's been three months since Aurelia survived the International Challenge--an elite monster-fighting competition. And the Triumvirate has been keeping a close eye on her ever since ... as if they expect her to cause them more trouble.They're right.Now that she knows about the underground revolution--and the dark secrets of her own past--Aurelia is hell-bent on escaping the government's watchful gaze and joining the rebels. Finally, she's found a cause worth fighting for. A way for her kind, the Norms, to take back their freedom.Then, when she overhears a Triumvirate official's conversation, she learns that it's even worse than she realized. The government knows about the rebels, and the rebellion. They're searching for people who sympathize with the cause. And they're coming after her next.Suddenly the time for dreaming about the rebellion is over. Aurelia must make contact with the rebels and plot a quick escape ... before the Triumvirate has a chance to capture her. But government forces and miles of monster-filled wilderness stand between her and the rebel headquarters, and dangers she never imagined lurk in the shadows.Before she can fight for the freedom of her people, she must achieve her own--or die trying.