Hey everyone! FIREDRAGON RISING, my YA fantasy novella, is out today! Find it on Amazon for only $0.99! Also, here's another excerpt to give you a taste...

FROM CHAPTER 5: POWER OF THE UNDERWORLD

Storm’s fire spell did little more than irritate the enormous monster, which let out an earth-shattering

cry and stomped one leg in fury. It swiped a tentacle toward Storm, but the Enchanter vanished in a flash of light, then reappeared behind the thorndevil, just inches from the tip of its flaming tail. The thorndevil twisted back to face him, turning away from Aurelia, and she spotted her opening—it was distracted, and it couldn’t see her from its present angle.

She had to take it. Her instincts—skills that were as much a part of her as her bones—sprang into action. A faint voice in the back of her mind chirped that she could let the thorndevil and Storm battle it out while she got away, but that could mean letting a monster live … which she couldn’t do. If the thorndevil struck again when she wasn’t around to stop it, and someone died because of that, then it would be her fault for not stopping the creature when she had the chance.

So she rushed forward, her eyes fixed on the tentacle that sat curled on the ground. Chopping it off wouldn’t kill the beast, but she had to weaken it before she could attempt a fatal blow. And at the moment, the thorndevil was too occupied by Storm to realize that it had a second attacker. This was her best chance. She paused, watching, and right when the Enchanter threw another blaze at the monster, leaped at the flamed-tipped limb.

Her blade sliced through the scaly flesh, green blood spurting from the wound. The severed tentacle landed on the ground, its flames dying out, but almost before she could look up, a second fiery appendage was slashing toward her. She rolled out of the way just in time to avoid the poisonous spikes. Springing up, she caught sight of a tentacle crashing down and whipped both blades out before her, forming an X with them. The tentacle landed in the crook and she pulled her arms apart, slicing through it.

Sensing that something else was about to strike her, she jumped back just in time to avoid the stream of spit spewing from the thorndevil’s snout. And a good thing too—a thorndevil’s saliva was acidic, and could burn through your skin as easily as fire burned through paper. 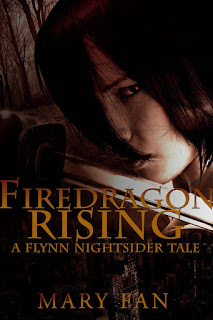 FIREDRAGON RISING is the sequel to the first FIREDRAGON novella.

Sinister plots. An underground rebellion. And a treacherous road filled with monsters and enemies unknown.
It's been three months since Aurelia survived the International Challenge—an elite monster-fighting competition. And the Triumvirate has been keeping a close eye on her ever since … as if they expect her to cause them more trouble.
They’re right.
Now that she knows about the underground revolution—and the dark secrets of her own past—Aurelia is hell-bent on escaping the government’s watchful gaze and joining the rebels. Finally, she’s found a cause worth fighting for. A way for her kind, the Norms, to take back their freedom.
Then, when she overhears a Triumvirate official’s conversation, she learns that it’s even worse than she realized. The government knows about the rebels, and the rebellion. They’re searching for people who sympathize with the cause. And they’re coming after her next.
Suddenly the time for dreaming about the rebellion is over. Aurelia must make contact with the rebels and plot a quick escape … before the Triumvirate has a chance to capture her. But government forces and miles of monster-filled wilderness stand between her and the rebel headquarters, and dangers she never imagined lurk in the shadows.
Before she can fight for the freedom of her people, she must achieve her own—or die trying.
Posted by Mary Fan at 9:00 AM