To Hell and Gone in Texas - Behind the Book

Some books take a winding path to become what they are. To Hell and Gone in Texas is one such edgy thriller. I had read Muriel Barbery’s book, The Elegance of the Hedgehog, and thought to myself, “Someday I’ll write my hedgehog book.” That’s the sort of memoir book I set out to write, a tale of two brothers who had gone quite different directions until they were estranged and hadn’t spoken to each other in twenty years. One was a womanizer and the other had recently retired as a detective for a sheriff’s department. The working title then was The Half-Life of Love, a tale to see if two brothers were able to reconcile. As I wrote, the thriller/suspense writer in me rose to the surface and the book became a tale of disrupted lives by forces far more evil and sinister than the woes of their lives.
So, I painfully set aside ten thousand words of backstory that was quite fun to write and set the pace for page-turning action. Events conspire that force the brothers to depend on each other, to get to know each other all over again, and to relearn trust.
Texas was an ideal setting for the story since it remains on a frontier where just across the border are cartels making billions and they are confronted by U.S. law enforcement people able to spend only millions. It’s an easy place for two brothers and their friends to get swept up into a situation that is way over their heads in danger. Add blistering heat in a drought year and tensions and tempers mount.
My background lends itself to this sort of tale. Years ago I worked on a police force. Before that I sold, tested, fixed, and bore-sighted guns, learned how the various models perform. My journalism days took me to many strange places, such as autopsies, explosive quarrels, and worse. But it was an active interest in the threatening societal changes that led to my researching the drug cartels, the way law enforcement agencies have responded, and the brutal levels that the war between the forces have taken. Other than the research on weapons and procedures, I rounded up everything I could in the libraries and on the internet, interviewed officers in the various departments and agencies, and did a few ride-alongs, where—believe it or not—every perp isn’t found with his shirt off as in the TV series Cops. I found a very dark world out there, one creeping its way toward more innocent people each day.
So, instead of a gripping memoir, the story galloped off, with me hanging on, to deal with good guys who might be as rough and bad as the bad guys, and people caught in the middle who have no business being there. It’s a tale with which most readers who wish to be safe in their own homes can relate. As for the brothers with disrupted lives, anyone who has ever been in a family may get a head nod or two there as well. And I suppose there’s a lesson too, that just when people think life has gotten bad, they can find it can get a whole lot worse. 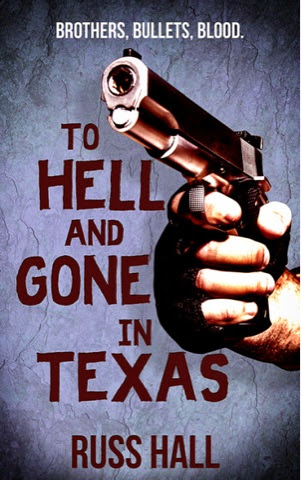 To Hell and Gone in Texas

Trouble big as all hell.
Retired sheriff’s detective Al Quinn hasn’t spoken to his brother, Maury, in twenty years. When Maury lands in the hospital under suspicious circumstances, though, Al reluctantly abandons his quiet country seclusion to look into the matter. A second attempt to take Maury out drives the brothers back to Al’s lakeside home, where Al knows the territory, but they’re not alone for long. ICE agents demand that Maury rat on his silent partner, city cop Fergie Jergens comes investigating the murders of Maury’s lady friends, and someone takes a match to Al’s house.
Al soon learns his problems are only getting started—his brother’s in trouble on both sides of the U.S.-Mexico border. Caught in a ruthless power struggle between the ICE and Los Zetas, a vicious Mexican mafia bent on ascendancy, Al learns the hard way who he can trust—and who’s willing to do whatever it takes to succeed.
With everything he loves on the line, Al will find out just how far he’ll go to protect his own.
Purchase links on publisher's website: http://redadeptpublishing.com/to-hell-and-gone-in-texas/