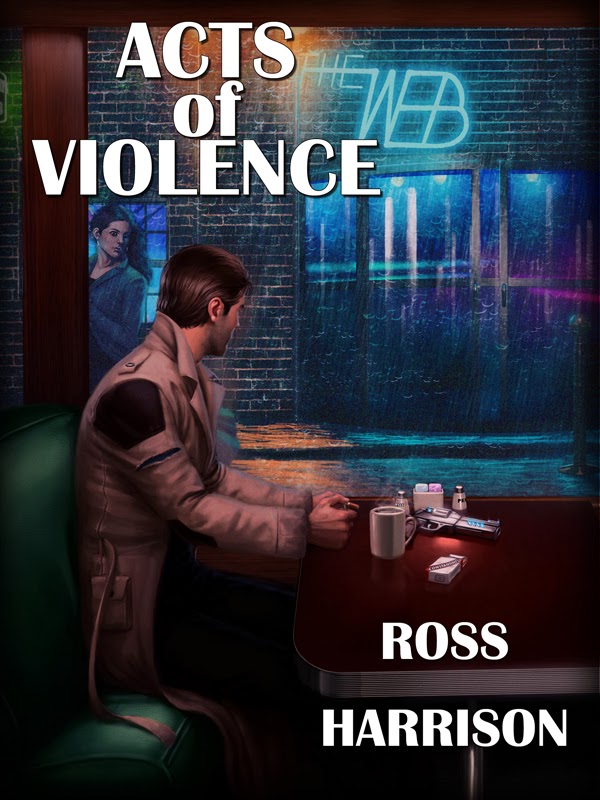 I have recently released my first thriller, Acts of Violence, which is also sci-fi and semi-noir. This led to me being asked what the top five elements of a sci-fi thriller are. One book doesn’t make me an expert on the matter, but I had a think about it:

When you consider it, the sci-fi thriller is a little more common than you might initially think. Inception, Blade Runner, Outland. These were the first three to pop into my head (yes, I know they’re films, not books, but the most important aspects apply to both mediums). The latter two even have strong noir elements.

As I said, I’m certainly not an expert, but to me the most important elements of sci-fi thriller are:

The adrenaline pumping aspect of a thriller is arguably the most important. The biggest challenger for the top of the list is suspense. The two could also be combined, but I decided to separate them here.

In the written word, action is less effective than in film, but if written right, it still has impact. The hero, or someone they (and so by proxy, you) care about is trapped by gunmen! They’re out of bullets and their aggressors are closing in. They have a matter of seconds to think of a way out or it’s all over. You can feel your heart rate increase; your eyes suck in the words quicker;  you’re suddenly sitting on the edge of your seat (turns out that’s a real occurrence); who cares that the dinner’s burning?!

If it’s the hero, then we all know that he/she will find that way out, or the writer/director will seize that opportunity to bring in an unexpected ally. But that doesn’t lessen the excitement. It doesn’t lessen the adrenaline pumping through you. You should do some exercise to burn that off, it’s unhealthy.

As I said, this could easily be tied in with the action and excitement. But in a thriller, it’s such an important element that it would be a disservice not to mention it as an element all to itself. So yes, in the above example, suspense should be strong as the gunmen close in and you don’t know what’s gong to happen, but that’s just one side to the suspense in a thriller.

The story itself, not just some scenes, should be suspenseful. Perhaps the hero’s daughter has been abducted to be sold off at auction, and he only has so much time to track her down before she disappears forever. Perhaps the villain has released a particularly nasty virus and, again, there’s only so much time to find said villain and obtain the...whatever it is you need for viruses. The cure. Vaccination. Whatever. Or perhaps the hero is accused of something he/she didn’t do and has to try to prove their innocence (or just run like hell).

A thriller has to be – and don’t be too shocked – thrilling. The action and excitement is one aspect to that, and suspense is the other. It keeps you guessing. Who’s the real villain? Will the hero make it in time? What the hell is going on (hopefully this is due to good writing, not bad – it becomes a little different then)?

This one can be overdone. It’s also hard to write a good plot twist these days. Most twists can be seen coming a mile away. Perhaps the best thing a writer can do now is acknowledge that the reader/viewer will know the twist is coming, and play on that.

The best example of this that pops into my head is actually the end of an episode of Sherlock. You know what’s coming, you know what he’s done, but the show lets you think you’re wrong. Then it lets you think that, actually you were right. Then that you were wrong. Then, finally, at the very last second, it shows you that you were right. But you don’t care that you knew it, because the show made you doubt yourself and your theory, and the twist did its job.

Sticking to the twist endings, I personally like happily-ever-after endings. But, these are much better when right up to the last second, you think it’s not going to happen. I can’t for the life of me remember what it was, but I watched a film not long ago that had, to me, the perfect ending. It was a tragic ending, and it let you wallow in the sadness and whatnot for a while, right up until the last second, when you realise that actually, all is well. Done right, this allows you to feel all kinds of emotions, but leave the book/film feeling good. Not everyone likes a happy ending, of course (don’t be rude), but as long as it’s not contrived, this method can work very well.

A strong(ly written) hero is a given, but writers often give less thought and character building to the antagonist, because they have less screen/page time, usually. A strong villain is important to a thriller, though, because much of the excitement and suspense revolves around them, directly or indirectly.

Of course, some thrillers pit the hero against something inhuman, but whether disaster movies really count as thrillers is perhaps debatable so we’ll ignore that!

The villain has to be scary, unpredictable, or perhaps scary in his predictability, because we know exactly what he’s going to do and how bad it’s going to be. However strong and capable the hero is, the villain has to at least match that, if not exceed it. Sticking with the Sherlock train of thought, that’s why Moriarty is such a good villain for Sherlock Holmes – no one else can match him.

This one is kind of obvious. You’ll notice that I haven’t, so far, mentioned science fiction. That’s because, as I said at the start, what makes a good sci-fi thriller is, to me at least, the same things that make any good thriller.

But the setting is often more important in a sci-fi thriller than a normal thriller. For example, Outland is set on a space station, and the cramped, overpopulated corridors help with the atmosphere (pun semi-intended). Equally, the occasional space-walk adds a silent eeriness, and the unending space around the character/s reminds the viewer how trapped the innocents are.

The theme can probably be shoved in here too. Is it the future gone bad? Some kind of invasion, an outbreak, dystopia? Usually, the focus of a sc-fi thriller is not the science. The sci-fi just floats in the background. That’s why setting is last on the list.

Many more elements are poured into this mix to make a good thriller, but these are the most important ones to me. Or at least...the ones I could actually think of.
Posted by Mary Fan at 11:48 AM